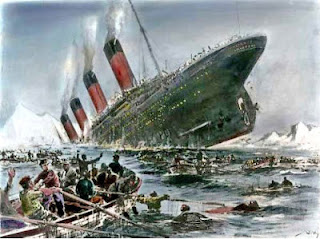 Ham radio is 100 years old in the US - as celebrated in this February article:

And also 100 years ago, amateur radio rendezvoused with headline disaster on  ...

when the unthinkable happened to the unsinkable.

And on that date, the Titanic - which "God Himself could not sink this ship" - was sunk by an iceberg.  (In all fairness, the Titanic was not advertised as unsinkable.)

So much went wrong that cost more than 1500 lives.  Not enough lifeboats.  The design that could not take a five compartment breach.  Lack of uniform wireless radio procedures - as wireless was in its infancy.

Much has been written about this disaster and many movies have been made about it.  The top grossing film Titanic (1997) likewise has been released in 3D for the centennial.  The following scene so captures the catastrophe while the passengers stood on the brink of eternity:

As mentioned in a post on the Titanic two years ago -

my grandmother had attempted to board the Carpathia in 1912 as she was immigrating to America.  The Carpathia was out of 2nd class tickets.  Grandma could not afford 1st class.  And she wasn't going in steerage.  So she waited till 1913 - a year before World War One started.  Lucky her.  Luck me.

But it was that very voyage of the Carpathia, which Grandma had attempted to board, that had rescued the survivors of the Titanic.  Oh, what stories she could have told.  And it's another what might have happened.

Back to the Radio Shack ...

As the Titanic was sinking ... and most passengers did not know this - the shock of the collision too slight - the night too calm and beautiful to forebode of death - the radio shack broadcast the general distress call to all vessels for immediate  assistance -

The operator of the nearby SS Californian had put down his ear phones and retired for the night.  And the crew did not recognize the distress flares sent by the Titanic.  But the call for help changed the courses of other ships, including the Carparthia.

Amateur Radio and the Titanic ...

Half way across the Atlantic, in a South Wales bedroom, Artie Moore was one of the first to learn that the Titanic was sinking, two day before the news got to the United Kingdom.  The local police first dismissed Artie's report ... that was until the news reached the British press.

Maybe there was something to this amateur radio thing?  This perhaps was the beginning of Ham Radio in assisting in disasters and catastrophes.

Aftermath of the Titanic ...

After the rescue of the Titanic survivors, the blame game began as well as a 100 years of the inquiries, documentaries, articles, theories, historical accounts, stories, movies, ....

And as in any disaster came new rules and regulations - a more orderly approach to radio and the air waves. - which was a good thing.

*  How the Titanic disaster pushed Uncle Sam to "rule the air"

Lesson learned - in any disaster - especially one of Titanic proportions - Ham Radio can be so important.

Who knows how many Titanic-like disasters will come.  But in this life, disasters do come.  Natural or man made - systems will fail, various communication infrastructure brought down.  How will we deal with it?

May the Hams be there to stand in the gap!

Posts on this subject:

Previous post in the "What a Ham I am" series:

A sample of some interesting Titanic sites:

History of The Titanic  (titanic-facts.com)

The Unlearned Lesson of the Titanic  (theatlantic.com)

Photo from Wikipedia:  Titanic
Posted by smithsk at 9:41 AM

Email ThisBlogThis!Share to TwitterShare to FacebookShare to Pinterest
Labels: 1912, amateur radio, disasters, ham radio, history, Titanic, what a ham I am