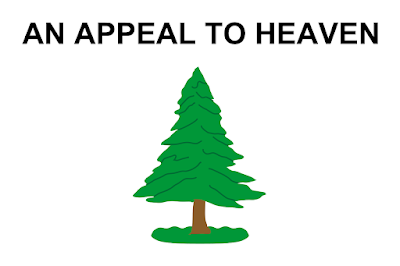 An Appeal to Heaven?

Sound like a call to prayer. It is. And it was almost 250 years ago as well as one of the motto on one of the earliest American flags.

In 1968, the US post office issued its series of historic American flags (then 6 cents). Among them, Washington's cruisers flag 1775 - AN APPEAL TO HEAVEN.

For the history of the Pine Tree Flag, the description in the video explains it best:

The Tree Flag  was one of the flags used during the American Revolution.  The flag, featuring a pine tree with the motto "An Appeal to God" or, more usually, "An Appeal to Heaven", was used originally by a squadron of six cruisers commissioned under George Washington's authority as commander in chief of the Continental Army in October 1775.

And General Washington (with his cruisers and this flag) has been considered the Father of our country, as so aptly described in this description and video below:

There would have never been a United States of America without George Washington. John Rhodehamel, author of "George Washington: The Wonder of the Age," details how Washington successfully guided the budding nation through war and nurtured her in peace.

Now, 250 years later, in the chaos and turmoil of our times, the Appeal to Heaven is the ongoing prayer for our republic.

And as Ben Franklin allegedly said,

Other articles on the Appeal to Heaven flag:

* For more on the historic flag stamp collection, check out: Jim's Stamp Album

Posted by smithsk at 8:01 AM No comments: