AI (part 2) - How Curiosity got our groove back

This ditty is a bit of nostalgia.

Burma-Shave was a brush-less shaving cream company, started in 1925.  Eventually, the company was sold to Philip Morris in 1963 and faded from our consciousness.  But Burma-Shave has left its mark in Americana for its clever advertising jingles displayed on highway signs.
(reference:  Feeling nostalgic? Now you'll rave! Here's the story of Burma Shave)

Yes, back in 1955 Burma-Shave did offer a free trip to Mars as a promotional gimmick as shown in the ditty above.  (reference:  Burma-Shave jingles 1955)

But the company did not count on one determined man, Arliss French, from Appleton, Wisconsin to take them up on it.  Mr. French gathered those 900 empty jars.  And Burma-Shave did keep their word and sent Mr. French and his wife to Mars.  Only it was spelled - Moers (pronounced "mars") and it was in Germany, that is.
(reference: Snopes - True)


Burma-Shave's jingles and sending a customer to Mars (though in Germany) in 1955, two years before Sputnik, attest to American Ingenuity (AI).

This humorous story also shows the fascination we have had with the Red Planet. Just google "Mars."  (Speaking of Google, as we have Google Earth, we have Google Mars.  Enough said.)   But according to the Science Fiction of the 1950s, we are long overdue in sending men to the Mars - check out:  Mars Science Fiction.
The future isn't what it used to be ...

On the topic of space travel, one of the heroes of American Ingenuity and Exceptionalism is Neil Armstrong, the first man on the moon, who passed away recently (August 25, 2012).

Though quiet many years after the moon walk, Neil Armstrong emerged in 2010 to speak out against the changing direction of NASA as its budget was being slashed and the Space Shuttle mothballed.
(reference: PICKET: Flashback - Neil Armstrong criticized Obama's space plan - Washington Times)

These cuts coincide with last few years when belief in American Exceptionalism and American Ingenuity has been shaken. The $16 trillion debt, high unemployment, deep recession, diminishing world influence lead to the conclusion that America is in decline.
(reference: Is America A Nation In Decline? - Forbes)

One columnist, Craig Shirley, laments the death of Neil Armstrong with the death of American exceptionalism as political elites seem to question that notion. Our clear sense of right/wrong and good/evil have been replaced by "moral equivalency."  Shirley writes that as a young boy, John F. Kennedy inspired him, but as a middle-aged man, Barack Obama dispirits him.
(reference:  Armstrong and the Death of American Exceptionalism)

As Americans mourn the passing of Neil Armstrong, earlier in the month of August, NASA has breathed new life in the American spirit by the success of the Mars mission  - Curiosity.


SciFi icon William Shatner -  "Captain Kirk" -  narrates the sophisticated technical maneuvering to navigate this rover successfully to the Martian surface.  Below, he details the "Grand Entrance" as it was planned to happen when touching down on Mars -

"If anybody has been harboring any doubts about the status of US leadership in space, there is a one-ton automobile sized piece of American ingenuity, and it is sitting on the surface of Mars right now."
(reference:  New York Times - Curiosity Rover Lands Safely on Mars )


Maybe the Mayans were wrong, and 2012 is not the end of the world (only kidding, but check out this link:  2012 End-of-the-World Countdown Based on Mayan Calendar Starts Today - ABC News)
.... but a turning point.

Curiosity is the boost we need
* to get our groove back *
and this video below gives a well-deserved victory dance.

What a magnificent tribute to the men and women who pioneered the space program ...

especially a tribute to Neil Armstrong, who personifies
the spirit of American Ingenuity!

Some (of numerous links) to Curiosity:

Neil Armstrong, Curiosity And The Challenge Of The Endless Frontier (August 26, 2012)

The Coolest Thing on Earth: Looking Around Mars on Your Phone - Robinson Meyer - The Atlantic (August 15, 2012)

Previous posts on this subject:

Photo from Wikipedia:  Mars, Neil Armstrong
Posted by smithsk at 7:01 PM No comments:

And it's a city in Egypt - literally the City of the Sharp-Nose Fish.
(reference: Christian Oxyrhynchus (modern al-Bahnasa) and its Environs)

The site is significant as it is a great archaeological find - what Egypt has been so famous for. For the City of the Sharp-Nosed Fish, it's all about the papyri.
(reference: Armchair archaeologists wanted, no experience necessary)

Indiana Jones - perhaps the most famous fictional archaeologist - could have been most interested in this site as his tales included searching for artifacts of Biblical proportions, such the Lost Ark and the Holy Grail. And the papyri in the garbage dump at this site was key to piecing together some of the mysteries of the Bible - its Greek translation, that is.
(reference: POxy Oxyrhynchus Online)

The New Testament was first written in Greek with a vocabulary of about 5000 words. And much of the criticism was that the Greek used was *not* the high level or classical Greek of scholars, such as found in Plato or Aristotle. But the Greek words used were very common and low level.
(reference: Biblica | In what language was the Bible first written?)

Yet, for years, scholars puzzled at some these Greek words - about 500 of them - which were not found in secular Greek. Even German theologian Richard Rothe had concluded that these words, seemingly unique to the New Testament, must be the "language of the Holy Ghost."
(reference: Eat This Book by Eugene H. Peterson)

But in the late 19th century, Bernard Grenfell and Arthur Hunt (pictured here) first dug out pieces of paper from the Oxyrhynchus rubbish heap and pieced together life in ancient Alexandria. They accounted for all these unique "Holy Ghost words" in the scraps from letters, accounts, grocery lists, bills - writings in the common language that never got bound and put in libraries.

After 1900 years, the "Holy Ghost language" was finally cracked.

The language of the New Testament was that of everyday people living in humble circumstances.

It has been said that a clergyman once told Tyndale:
"We had better be without God's laws than the Pope's."

But Tyndale responded:
"I defy the Pope, and all his laws; and if God spares my life, ere many years, I will cause the boy that driveth the plow to know more of the Scriptures than thou dost!"
(reference: 400th Year Anniversary of the Authorized King James Version of the Holy Bible, the KJV - 1611 - 2011)

It was Tyndale's mission that the humblest of people, like the lad driving the plow, know the Holy Scriptures as spoken in their common language, which could be clearly understood by all.

And as shown in this clip below, Tyndale was martyred for this cause, strangled and burnt at the stake in 1536, for this heresy. His last words:

This prayer was answered. In 1539, King Henry VIII allowed the publication of the English "Great Bible." And in 1611 was published the most well-known English translation, the King James Bible, of which 75 to 90 percent was incorporated from the work of William Tyndale. And it's still the most widely spread version in the English language 400 years later.
(reference: King James Bible still going strong at age 400 | World news | The Guardian)

There has been a spiritual struggle as old as the fall of man to keep the Word of God from the common people. This was especially true during the Dark Ages. And the spiritual darkness of medieval Europe is the setting for the historical fiction trilogy: 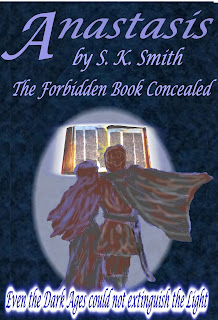 The first book of the series:

This book is divided into four parts. The first part concerns the hero, Lord Adryan Crippen, and is aptly called -

The Rise and Fall of Lord Adryan Crippen

This high and exalted lord, Adryan Crippen, one of the elite Fortunate Five Lords of the Kingdom, has everything in this world within his grasp - wealth, position, power, handsome looks, and the chance to marry the most beautiful and wealthy woman in the region - Queen Anastasia.  Then it all evaporates ....

(The Queen's name is derived from anastasis - the Greek word translated as resurrection in the New Testament.)

The following Bible verse is the theme of the first part:

For thus saith the high and lofty One that inhabiteth eternity, whose name is Holy; I dwell in the high and holy place, with him also that is of a contrite and humble spirit, to revive the spirit of the humble, and to revive the heart of the contrite ones.
Isaiah 57:15
(King James Version) *

Only by losing everything does the hero gain everything. And his help comes from Bishop Sinjin, a type of John Wycliffe and William Tyndale, whose passion is to translate the Word of God into the common tongue of the people, so the humblest in the kingdom can understand it. And there is great opposition to this - which plays out in this book and its sequels.

For more information and news check out: Anastasis
Available: for a Nook or ePub - Barnes & Noble
for Kindle - amazon.com

* (Yes, I know the King James came out in 1611, and the trilogy is set in the 14th century. But the version is readable, has the flavor of antiquity, and most important - it's in the public domain, so there is no issue with copyright or license.)

That was then, what about today?

The King James Version has set a high standard, yet many regard it as sacrosanct. But some very good modern translators have this same passion of translating the Word of God into the language of the everyday people of the times - much like William Tyndale.

Here is a clip of the Gospel presented in hip hop - G.O.S.P.E.L. by rapper Propaganda for the person on the street in the 21st century:

The Lord dwells in the high and holy place, but also in the hearts of those of humble spirit. And the New Testament was written in the language of the street - not for the erudite or the elite.


And Christian rapper Propaganda puts the Gospel in the speech of the street in the 21st century. And I believe William Tyndale would be most pleased with this translation.

Other articles on this subject: