I'm not sure what the occasion was. I believe it was in the year 2000 and we were selling our house. One of the lookie loos meandered into our loft above our living room area.

My dear husband had claimed the loft as his space, marking it with his computer, plaques, books, etc. The lookie loo - a guy - pointed to our framed set of Ham radio licenses, his and hers, on the wall. He grinned at me.

That told me I was not alone. Men, who are avid Hams, often like to get their wives or significant others involved with their hobby. And I was one of them - one of the fraternity (and sorority) of Hams.

And what really are Hams in the context of geekdom? Ham is slang for amateur radio operators. Here is an introduction from a really, really old video:

Back in the 1980s, when my husband "did that to me, too" - talked me into getting a Ham radio license - there had been five levels of Hams as defined by the FCC: Novice, Tech, General, Advanced, Extra. Later a sixth was added - Tech Plus.  All had required some level of code proficiently.

That is Morse code, such as : Di di di dah dah dah dit di dit  .... (That is the universal HELP signal - SOS)  At this time, most us Novices had to bang out code on a paddle or key. For the entire alphabet check out the video below:

As a Novice, we only had air privileges with Morse code and limited band frequencies on which to broadcast. I recall, in the early 1980s, listening to a cassette tape to practice up on code to pass at the 5 words per minute requirement for Novices. And in that tape was this gem:

"Jonathan Livingston Buzzard keeps quiet except when flying over my shack."

This was special in that it used every letter in the English alphabet.  And it was cute, in that the novella, Jonathan Livingston Seagull, which had been a big hit in the 1970s, was still fresh in our memories. But when I started to copy "Jonathan ..." I knew the rest of this old buzzard was coming right for me, which kind of defeated the point of the code practice.

A few years later, with much encouragement from my husband - who would go on to get his Extra class license, I moved up to Tech Plus. That meant that I had passed the test on the written level for General class (the class above Tech), but did not take the code test to pass for General.

Then the code requirement for General was 13 words per minute. And I just was not ready for it. So I sat fat and happy for the next 25 years as a Tech Plus, which was good enough for normal purposes. And though my dear husband reminded me I had opportunities to convert to General, I just did not do it.

I am a very bad Ham.

The amateur radio licensing rules had evolved much in the last 30 years. Now, there are only three levels: Tech, General, Extra. Novice was dropped. So was Advanced. Yet, Novice, Tech Plus, and Advanced are still grandfathered in. No code is required. Yippee!

Will I be on the air soon?

That will be a subject for another post. And Field Day is coming.

and for you non-hams that means - best wishes.

Photo from Wikipedia Commons: International amateur radio symbol
Posted by smithsk at 8:44 AM No comments: 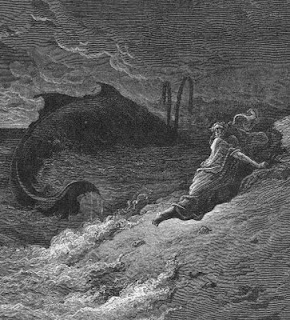 Photo from Wikipedia: Jonah and the Whale
Posted by smithsk at 1:44 PM 2 comments: 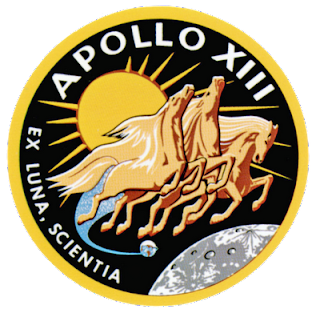 Posted by smithsk at 2:00 AM No comments: As we blast into the second decade of the 21st century, eReaders and eBooks are popping up all over.

I have read a few eBooks via my computer.  Here I can download PDFs and look at them with the Adobe reader.  And the PC software to read Kindles and other types of ePubs can be downloaded for free. That makes sampling the goodies easier as various eBook sites display their wares.

When my tax rebate comes, this Baby Boomer is about to make the plunge and break the bonds of my PC to get a dedicated eReader.

Now, the conundrum. What to buy and get the most enjoyment and bang for the buck?

At first, iPad sounds like it's the the most flexible as it can read most anything.

But it's really another computer. It's relatively expensive, if it's sole purpose is to be an eReader.  And I already got a laptop and I'm not a mac person.

The new Kindles look most appealing. The price is reasonable. The reader very light. I read some good review on readability and battery life.

But it is only in black and white and limited to Kindle formats and does not read other forms of ePubs.  (Except for PDFs)

I'm leaning very heavily for a color Nook.   It does color, obviously. It supports ePub formats and PDF. Barnes & Noble supply the largest selection of eBooks.

Unfortunately, they don't do  Kindle.

Oh, well. You can't have everything.

Question for eReader aficionados:  Which do you prefer?

Picture from everystockphoto.com: Amazon Kindle & Sony eBook
Posted by smithsk at 8:55 AM 1 comment: