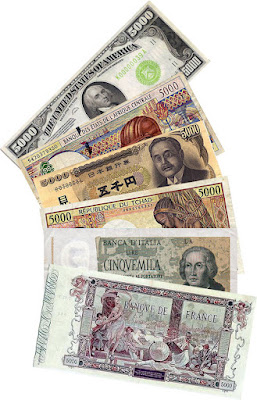 I think of Scrooge McDuck and his famous money dive: here

But Money, Money, Money is one of the catchy songs, written by ABBA from the musical, Mama Mia (2008). It's about a girl's quest to find out which of three men could be her father before she's to be married.

Meanwhile, her mother, a former pop singer, does a number with her backup singers about the struggles of owning a rustic hotel on a Greek Island:

I heard this song many times, such as bumper music for shows that discuss ... money.

Money is power, a force that motivates, drives politics, and makes history.

And Scripture has much to say about our attitude about it and how we handle it.

Here are a few samples:

Root of all (these) evils:

For the love of money is the root of all evil: which while some coveted after, they have erred from the faith, and pierced themselves through with many sorrows.

Jesus had some words who/what is our master:

No man can serve two masters: for either he will hate the one, and love the other; or else he will hold to the one, and despise the other. Ye cannot serve God and mammon.

Bad treatment of the poor:

The poor useth intreaties; but the rich answereth roughly.

But ye have despised the poor. Do not rich men oppress you, and draw you before the judgment seats?

And thou shalt take no gift: for the gift blindeth the wise, and perverteth the words of the righteous.

Yes, this is much about the abuse of the rich. But showing favoritism to the poor is also wrong.

Yet, targeting the rich is condemed:

Neither shalt thou countenance a poor man in his cause.

Many Biblical heroes were wealthy:

Job - see The Book of Job

A just man, who was wealthy. He lost it all, suffered, then got twice back and gave an inheritance to his daughters as well as his sons.

Wealthy man of his day who was called out to become the Father of Faith.

Abram believed the Lord, and he credited it to him as righteousness.

His line would come the Messiah, through which all nations would be blessed

I will make your descendants as numerous as the stars in the sky and will give them all these lands, and through your offspring all nations on earth will be blessed,

He prayed for wisdom and God granted his request. And Solomon carried out his father David's desire and built the Temple. He provided a witness to the known world, such as drawing the Queen of Sheba from the ends of the earth to hear him.

They saw the star of Bethlehem, they sought Jesus. They gave the baby Jesus rich gifts--gold, frankincense and myrrh. Thus, Mary and Joseph had a resource to pay for their flight to Egypt to escape Herod who sought to kill baby Jesus.

Rich man who as a secret disciple that became public. With Nicodemus, the two buried Jesus, fulfilled prophesy --

He was assigned a grave with the wicked, and with the rich in his death, though he had done no violence, nor was any deceit in his mouth.

Paul wanted to go east, but the Spirit sent him west to Lydia, who he found leading a prayer meeting by the river.

Her home was the first Christian church in Europe.

There's much, much more. And that can be for another time.

Meanwhile, here are some final thoughts.

For ye know the grace of our Lord Jesus Christ, that, though he was rich, yet for your sakes he became poor, that ye through his poverty might be rich.

But my God shall supply all your need according to his riches in glory by Christ Jesus.

Posted by smithsk at 3:41 AM No comments: