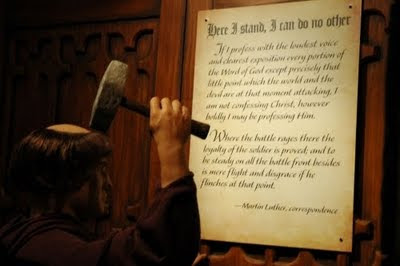 After moving and settling down in a new area of the country, I joined a Protestant church in the community. As part of the new member's class, we got an introduction to the denomination and an overview of church history. And Halloween of 1517 was a most important date.

October 31, 1517, Martin Luther had nailed "The Ninety-Five Theses" to the castle church door at Wittenberg, which outlined grievances against the Catholic Church, in particular the abuse of indulgences. Some historians have pinpointed this act as the catalyst of the Protestant Reformation and later the Counter-Reformation (also known as the Catholic Reformation or Revival), which sought to remove abuses within. Many Protestant churches see their genesis in the posting of Luther's "95 Theses."

In my new member's class, we covered the different styles of church government and traditions of the Catholic and various Protestant denominations. Which one is right?

Taking Luther's lead of Sola Scriptura, "by Scripture alone," the New Testament does not give details in governing or even following many cherished Christian traditions (like observing Christmas on December 25). What the New Testament gives are great principles and guidelines. Therefore, it seems that any system of church governance will work if there are godly leaders of character. Without godly character, it does not matter. No system will work.

Catholic? Protestant? Which is the "true" church?

The Scriptures say in Ephesians 4 (King James Version):
4 There is one body, and one Spirit, even as ye are called in one hope of your calling;
5 One Lord, one faith, one baptism,
6 One God and Father of all, who is above all, and through all, and in you all.

Strong's Greek Dictionary gives our English translation of "church" as ekklesia, a called out assembly. The "one true church" is comprised of all believers whom Jesus Christ has called out to Himself.

In the words of St. Peter:

9 But ye are a chosen generation, a royal priesthood, an holy nation, a peculiar people; that ye should shew forth the praises of him who hath called you out of darkness into his marvellous light;
10 Which in time past were not a people, but are now the people of God: which had not obtained mercy, but now have obtained mercy.
I Peter 2 (King James Version)

The church of the New Testament and the ancient creeds (Apostles, Nicene) transcend all denominations, whether Catholic, Protestant, non-denominational, evangelical ...

Using the Protestant definition of "saint" as any Christian, what more appropriate day for "all saints" to reflect than the Eve of All Saint's Day - Halloween in 1517 - a turning point, which called the church back to the Bible?

Biblegateway.com
Posted by smithsk at 5:00 PM No comments:

Roger Bacon - a scientist ahead of his time 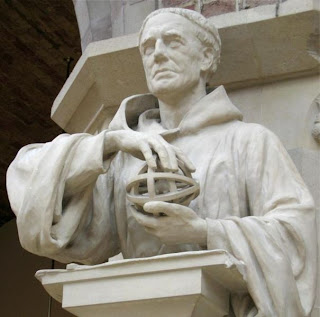 Continuing from the past 2 blogs ....

This summer, I had read the Dan Brown's novel Angels & Demons and was fascinated by the renewed Science vs. Religion debate. Science and the Bible are some of my favorite topics.

During research of life in the Middle Ages, I discovered that the Church did not see Science and Religion as poles apart as we may view them today. In the Medieval Church, pursuing Science was encouraged as a means to better understand God. One of the most remarkable Churchmen and Philosophers of those times was Roger Bacon.

Roger Bacon (c. 1214–1294) was a Franciscan Friar who wrote his Opus Magnus for Pope Clement IV. In the area of science, he was hundreds of years ahead of his time.

The Earth is Round:
Two centuries before Christopher Columbus sailed for America, Roger Bacon wrote that the curvature of the earth explained why we can see farther from higher elevations.

Splitting White Light into a Rainbow:
Four hundred years before Sir Isaac Newton's experiment (in the 1660s) that split white light with a prism into the spectrum of the rainbow, Roger Bacon in the 13th century passed light through a glass bead to produce the rainbow.

Father of Modern Science:
"Isaac Newton's discoveries were so numerous and varied that many consider him to be the father of modern science." Yet, a few scholars credit Roger Bacon as a pioneer in the advancement of natural science, who emphasised the importance of mathematics and "experimental science." In his works, Bacon mentions gunpowder and lenses and proposals for horseless carriages and flying machines.

The telescope:
In the "The Starry Messenger," Galileo had improved the telescope (invented by Flemish spectacle-maker Hans Lipperhey in 1608) and turned it to the heavens to observe such things as the craters on the Moon and the four satellites about Jupiter. In the Cipher of Roger Bacon, the manuscript suggests Roger Bacon was in possession of a reflecting telescope, which he observed and drew a spiral nebula.

To sum up the Medieval philosophy of the Church concerning Science: If the Bible contained the truth, how could the Church be threatened by understanding the truth better? Only later, during the time of Galileo, the Church became frightened of Science. (That could be the subject of another blog. )

A great find on the Science vs. Religion debate was the Terry Jones' (of Monty Python fame) series - Medieval Lives. Medieval Philosophers were the scientists of the "Dark Ages" which were not as dark as they seemed. 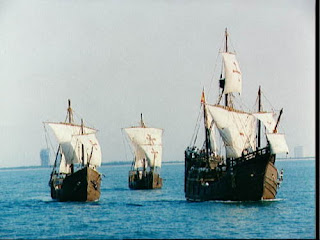 Many Americans will celebrate Columbus Day this Monday- October 12, 2009.

In my school days, Christopher Columbus was presented as a hero (and rightly so), for he not only discovered America, but he proved that the world was round to the unenlightened medieval academia and potentates. And this myth was re-enforced in American culture, even humorously such as a favorite Bugs Bunny cartoon - Hare We Go - as Columbus argues with the King of Spain whether the earth is flat or round.

In my previous blog, Dan Brown's novel Angels & Demons integrated into its plot the Church's pressure on Galileo to recant his helio-centric theories. Hence to this day, Science and Religion are perceived to be poles apart.

We may cast medieval philosophers (scientists of their time) as superstitious, ignorant people, clinging to falsehoods like the flat earth. But the medieval Church never taught that the earth was flat. Medieval sailors knew the earth was round for they observed ships disappearing over the horizon. Much of that perception of the flat earth mentality comes from the fantasies of a 19th century American novelist, Washington Irving, best known for The Legend of Sleepy Hollow and Rip Van Winkle.

Irving's biography of Columbus, The Life and Voyages of Christopher Columbus, came out in 1828. Before the Great Voyage, a scene in this book describes how Columbus was confronted by the ignorance and bigotry of the Church authorities. They accused him of heresy for claiming the earth was round, when the Church taught that the earth was flat. Hence, Washington Irving's fantasy of Columbus portrayed a false picture that the medieval Church suppressed knowledge and suppressed those who taught to extend the boundaries of Science.

Yet, the philosophers of the Middle Ages saw the purpose of knowledge as useful if it brought them closer to understanding God. Therefore, Churchmen carried out scientific experimentation with the blessing of the Church. Roger Bacon was one of these remarkable Churchmen, who was 400 years ahead of Galileo and Newton in his discoveries. And this, Lord willing, will be the subject of my next blog. 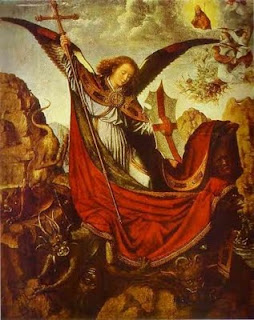