"What's in a name? That which we call a rose
By any other name would smell as sweet."

Alois was a minor Austrian customs official, born in 1837 as an illegitimate child of a peasant woman. Five years after his birth, his mother married Johann Georg Hiedler, the man believed to be his father, a wandering miller, plying his trade in Lower Austria. Yet, for the first 39 years of his life, Alois bore his mother's maiden name, Schicklgruber, since Johann had never bothered to legitimize his son's birth.

Johann was also a deadbeat dad.  After Alois's mother died in 1847, Johann vanished for the next 30 years only to reappear at 84 to testify before a notary that he indeed was the father of Alois. Perhaps, this was done to help his son obtain an inheritance. How nice.

In 1876, the parish priest finally changed Alois's baptismal certificate to a variation of his father's surname. Later, Alois's third son from a third marriage expressed to his only boyhood friend that nothing had pleased him so much as his father's name change.

Young Adolf told August Kubizek that the name Schicklgruber "seemed to him so uncouth, so boorish, apart from being so clumsy and unpractical. He found 'Heidler' ... too soft; but 'Hilter' sounded nice and easy to remember."

Reference: The Rise and Fall of the Third Reich by William Shirer (Pages 6-8)

So back in the 19th century, a deadbeat dad - Johann Georg Hiedler - not only changed the surname on his son's baptismal certificate, but also he would become the grandfather of one of the deadliest world figures of the 20th century - Adolf Hitler. Now, that's a scary thought.

Der Fuehrer's Face  (from which the above video clip was taken) was the only Donald Duck cartoon to win an Oscar.

Sticks and stones may break my bones
But names ... Schicklgruber? Hielder? Hilter?

They can change history ... and not for the better!

Picture from everystockphoto.com:  Hall of Remembrance, US Holocaust Museum
Posted by smithsk at 8:10 AM No comments: 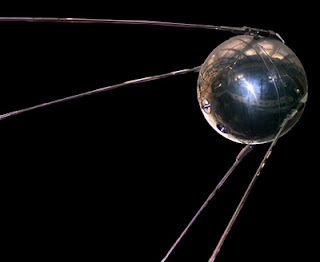 Remember the Cold War?  Or for readers much younger than me, remember hearing about it in history then?  The main players were the USA versus the USSR.

On October 4, 1957, the former Soviet Union, launched the first artificial satellite into orbit, called Sputnik, loosely translating from Russian meaning "traveling companion of the earth." This should have been a cause of celebration in the West as it was in the East, for Russia's giant leap in technology and science. Not!

Instead, Sputnik caused great angst in the West, especially in the United States, which felt caught with its technological pants down. With US public support, this game changing "October surprise" of 1957 launched the space race and precipitated the formation of NASA on October 1, 1958.

The month of October in the late 1950s were interesting times.

Sputnik also inspired a coal miner's son and his classmates in West Virginia as told in the 1999 movie - October Sky, which is an anagram of the book,"Rocket Boys." From 1957 through 1960,  Homer Hickham and friends with the encouragement of their science teacher Miss Riley, through trial-and-error and much perseverance, learned to build rockets and get them to fly.

The following clip shows some of the Rocket Boys' struggles and triumphs:

That story was set over fifty years ago.

More information can be found at the Homer Hickam official Website: homerhickam.com

Since October 1958, the USSR has fallen apart. The US space shuttles are retired and not replaced. After the high of sending a man to the moon in 1969, NASA may be ending in a whimper, though there have been talks to re-energize space exploration.

Maybe we need another Sputnik to get us going?

Sputnik from NASA astronomy picture of the day: 2007 October 4
Posted by smithsk at 10:00 AM 2 comments:

Or some other rude phrase, such as  - "Go to (someplace where it is very hot.)"

Such words elicit feelings of rejection, isolation, anger, hurt, and serve to drive people away.  Yet, in Mary Poppins, "Go Fly a Kite" means quite the opposite.

End of Part 3, George Banks, spirits crushed, is plunging into an abyss of his deepest fears - loss of his position and the esteem of his peers.  His "take your kids to work day" ends with a panic, a run on the bank as his children flee in fright. Meanwhile, at home his wife rushes off to do her own thing, oblivious to the family crisis.

It gets worse.  Finally home, George's bosses call him back to work that evening for a regretful course of action.  Yet, in this dark moment, the blinders start to come off, and George sees the love of his children.

One of the more poignant moments, George leaves home walking the dark streets of London under the shadow of St. Paul's Cathedral, uncomplaining, to face his troubles, alone.  What he endures at the bank is humiliation as his bosses dress him down and discharge him.

Yet, at this low point, George has his "ah-hah" moment as he draws strength from the most unlikely of sources.

Can you say - Supercalifragilisticexpialidocious?

Today, many face our worst fears.  Loss of job?  House foreclosures?  Debts?  Underpaid and/or overworked for those who still have jobs?  Humiliation of being laid off or being rejected?  And other problems that seem so big?

It's a lonely road, but at such times, family, friends, and unexpected "angels" may come into our lives for such a time as this.  And this caring is a bright spot, which may cause the blinders to come off and see the people about us who love us.

George does not come home from the bank that evening.  The morning after, Mrs. Banks shows concern for someone other than herself as she fears the worst after learning that George had been discharged last night.

Did he go fly at kite ... like literally go jump in the lake? Or in this case a river?  In his despondency after being sack, did he decide to end it all?

Actually, George did decide to go fly a kite.

The first time I heard this song I thought it was rather silly.  But now I see it differently.

In facing the prospect of losing everything, George finds everything, in particular his family.  The movie starts with a kite, as the Banks children wreck it in the park after slipping away from their mean faced nanny (before Mary Poppins.)  Their father mending the broken kite means a lot to the Banks children - perhaps a metaphor for mending their family relationships?

Now, the entire family gets together in this project and enjoys flying their mended kite.  In the Disney happy ending, last moment George gets not only his job back, but a promotion. But the promotion does not matter as much as George's real source of joy - bonding with his loved ones, who are now with him.

The wind changes.  And Mary Poppins keeps her word to stay only till the wind changes.  It's time for her to move on.  Before exiting the Banks lives, Mary is reminded that the children now think more of their father than they do of her. She responds quite appropriately - As it should be.

During a time such as a serious recession, many of us have been forced to downsize, yet in doing so have rediscovered our families, spending not money, but quality time with them.

Anyone can be a Bert or Mary.  No supernatural powers required.  Just being there during a time of need can make a big difference and even be a source in which to draw strength during a crisis.  And that is why the movie, Mary Poppins, is so timeless.

On the importance of fathers like George Banks, this Father's Day message in 2010 from President Obama is spot on:  Take time to be a Dad today

Whether 1910 or 2010, little things matter a great deal.  Even something like flying a kite.  And a father's influence is so important!
Posted by smithsk at 10:30 AM No comments: