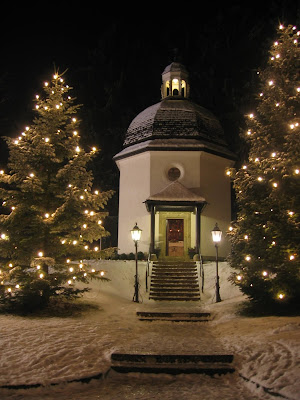 Silent Night
Known in German as Stille Nacht Heilige Nacht
It was first performed Christmas Eve, 1818, in St. Nicholas Church in Oberndorf, as shown in the above picture.
The lyrics were written in 1816 by a young priest in Austria, Joseph Mohr and the melody by Franz Xaver Gruber. Because the church organ was being repaired, the carol was first played on the guitar.
Since then, Silent Night has gone viral and has been translated into over 300 languages with many renditions.
For the carol's background:  The Story Behind the Beloved Christmas Carol "Silent Night"
Fast forward to the next century:
Christmas Eve, 1914
During a temporary truce on the battlefield of the First World War, soldiers sang carols from home, including "Silent Night," which was simultaneously sung in French, German and English.
The video of a chocolate ad harkens to this event of peace during war.
(Reference: https://youtu.be/NWF2JBb1bvM )
Fast forward to 50 years later, during troubling times....
1966
Simon and Garfunkel did their rendition of Silent Night with the reading of the 7 O'Clock News.
(Reference:  https://youtu.be/VNyqlx0--i0 )
In a world of bad news--wars, conflicts, violence, unrest--there is a yearning for Good News.
And Christmas celebrates the coming of the Savior--the Prince of Peace.
Peace this Christmas 2021
and blessings for the New Year of 2022.
-------------------------------------
-------------------------------------
Previous posts in the series:
Music (part 1) - Winter (2016)
Music (part 2) - All You Need is Love (2016)