There's Something about Lilacs ... 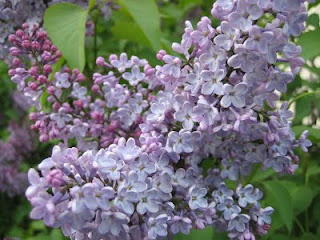 We have had crazy weather this year.  Spring was very wet - wetter than usual.  The river was high and flooded in some areas.

As a result of the heavy rains, flowers and plants in the garden seemed to be a month behind their usual blooming or sprouting schedule.

Behind our house, lilac bushes line the irrigation ditch. They, too, were late bloomers, just opening up the first weeks of June.

The second week of June the lilacs peaked in their glory. And they were worth the wait. They were pleasantly fragrant and the purple hues were most intense, especially  in the light of the setting sun.

My elderly mother-in-law, also, anticipated the blooming of the lilacs after a rainy season.

Second Saturday in June, we picked mother up at her residence for many errands. Across the street from her in an alley was a luscious clump of lilac bushes. From her place in the front car seat, I was able to pull down the branches so she could touch the bouquet of purple lilacs, see them up close, and smell them without plucking them from the bush. They were wonderful and lifted her spirits.

As made our way home that afternoon, I saw a sign for a wedding in a our neighborhood. It was June. It was Saturday. Very popular time for weddings.

Then we saw an unfamiliar SUV was parked near our driveway. Some unexpected visitors?

Behind our house by the long row of blossoming lilacs was the newlywed couple - the groom in his three-piece suit, the bride in a lovely long white dress. The photographer was busily snapping pictures of the newlyweds in front of our gorgeous lilac greenery and blossoms of various purple shades and white blooms.

We waved and wished them well. They had been celebrating their wedding just up the block from us when the lilacs behind our house got their attention. And the photographer immortalized this great event in their lives with the backdrop of these late bloomers.

Whether newlywed or in your nineties ...


There's something about lilacs.


Can't you just smell them?

God saw all that he had made, and it was very good.


Photo from Wiki commons: Lilacs
Posted by smithsk at 10:00 AM No comments:

Kittens in my bushes! 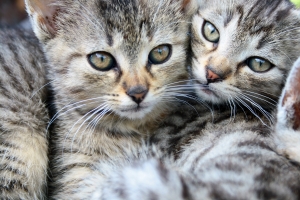 First week of May, I was finishing breakfast, sipping my coffee.  A lovely day.

The curtain was drawn to a view of the our mini-forest near the front door.

Three Douglas firs, one blue spruce, three juniper bushes all with low hanging branches - the perfect environs for the black birds to make their nests and for the bunnies to live.

Some fuzzy blobs on the ground near the low lying branches got my attention. Some birds bouncing around perhaps? No. I looked closer.

Three of the them. What were they doing there? They had just slipped out of my mini-forest.

I hollered to my dear husband.

There's kittens in our bushes!

We watched them, wondering how they got there. The little ones looked lost. Two kittens stuck together and were off exploring the strange world out there. One was shy and lagged behind in the cover of the trees. Then the two brave ones wandered into the street. Not good.  These kittens knew nothing about the perils of cars.

The two made it across the road. It had little traffic since it was a dead end. At least the kittens did not try to cross the road in front. I have seen hockey moms driving their SUVs while talking on cell phones imperilling the pesky mule deer sassily meandering into the road.

Across the street, the kittens upset some of the birds, then they returned to their sibling and their familiar home in the bushes. We saw no momma cat around that day. Undoubtedly, the little ones were hungry and were looking for their next meal. So we left out some water and beat up an egg, setting the bowls near the bushes and low hanging branches.

A brave one came out sniffing.  What's this?  Food!

Her other two litter mates got the idea.  Later, that day we got them some wet cat food.  They took an instant liking to it. We had them hooked - on the path from feral to domesticated. Within a few days, the three little kittens were eating on the porch and moved their sleeping quarters from the bushes to the safety of our garage.

Their personalities were evident from the get go.

The brave and most obnoxious one.  This one soon dashed into the house when I opened the door  as if it were some game.  She had no qualms seeing me as a tree - climbing up my leg (good thing I wore pants) and jumping onto my shoulder.

The cautious and sweet one. This one was wary, more polite, and would allow us to handle her, but never imposed herself on you.

The scaredy one.  This one did not like to be touched. When I did catch him, he growled and squirmed. But he came around - just out of reach - and joined his siblings in the eating and the sleeping.

Though different, the three stuck together. As they napped, they all piled on each other for warmth as well as giving each other moral support in this big strange world.

But we could not keep them.

My dear husband is quite allergic to cats. None of our neighbors wanted them. The local shelter was full. Yet, these kittens were so vulnerable and to turn them out into the street would be the death of them.

What to do with three little kittens? The answer came in a flyer from a drug store.

Our local spay and neuter task force and cat rescue sponsored an event at the county fairgrounds to fix pets, barn cats, and feral cats and help place them through adoption. So we took care of the tiny fur balls for two and half weeks before the event. They got used to humans, hooked on Kitten Chow, and began to learn the concept of a litter box.

The day came to roundup the kittens. It was tough, for I'm sure they felt betrayed as we had snatched them from the dinner bowl - only way we could get the scaredy one. They were all very quiet during our ride into town.  They entered the queue of many other kitties waiting in their carriers to be fixed. We filled out much paperwork, left a donation, and left the kittens in the hands of cat rescue.

The story had a happy ending.

Cat rescue followed up with a phone call. They found the three little kittens a home. A lady, who had just lost her cat, took in all three. May they live long and be spoiled rotten!

Thanks be to the kind hearted people who offered their helping hand and continue to do so in the rescue of God's creatures. You made a difference in the lives of these little ones.

I love these words from Francis of Assisi:


Photo from everystockphoto:  gray kittens
Posted by smithsk at 9:40 AM No comments: