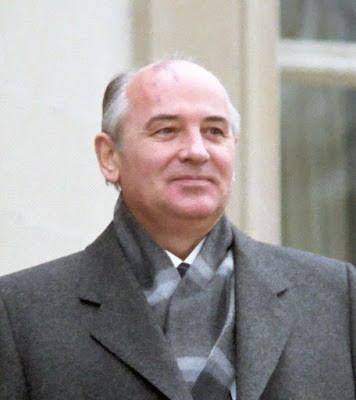 Gobachev1985/Wikipedia
Mikhail Gorbachev, the eighth and last leader of the Soviet Union, aka USSR, passed away on August 30, 2022.
Gorbachev's tenure spanned the end of the Cold War and the tear down of the Berlin Wall as well as the breakup of the Soviet Union.
A tribute to him is shown below:
( reference: https://youtu.be/qgqDtgoLN_0   )
The historical fiction S*T*C covers 1984-1986, the final years of the Cold War and the last three leaders of the Soviet Union.
In 1984, Samantha Clark was one of the women who had breached the male-dominated mission control teams inside the S*T*C--the Satellite Tracking Station--as the Reagan Administration took on the "Evil Empire" of the Soviet Union.
---------
In 1982, Yuri Andropov had followed Leonid Brezhnev, but Andropov passed away February 9, 1984.
This news broke at the end of the first day Sam had worked the S*T*C:
Sam turned on the radio for news about the Winter Olympics. Instead, a funeral dirge was broadcast. Then the lead story: Soviet leader, Yuri Andropov, had died. He had only served a little more than a year after succeeding Leonid Brezhnev.
There goes another one of the old guard from “The Evil Empire.” Sam’s thoughts wandered to President Ronald Reagan as she turned off the freeway onto one of the roads into Santa Vittoria.
When Reagan had used the term, Evil Empire, in a speech a couple years ago, he had gotten much flak from the press. But Reagan’s defense buildup to defeat communism was one of the reasons Sam had secured a job at the S*T*C.
Smith, S K. S*T*C (p. 44). Kindle Edition.
---------
After Yuri Andropov had passed, Konstantin Chernenko followed as the new leader, which the crew inside the S*T*C soon learned.
Later that morning, Lester Wong picked up the newspaper. “Konstantin Chernenko? Sounds like an Asian pin ball machine.”
“Pachinko?” Tan asked.
“Sounds like it.” Lester explained to those who did not have their newspaper privileges, “It says he’s now the chairman of the Presidium of the Supreme Soviet…fancy title for the USSR’s latest Fearless Leader.”
PC said in his southern drawl, “And the reason we all have jobs.”
Smith, S K. S*T*C (p. 104). Kindle Edition.
---------
Then a year later, Konstantin Chernenko passed away, March 10, 1985. He was followed by the Soviet Union's final leader, Mikhail Gorbachev:
As Sam was driving up Mt. Nauseous, she heard another funeral dirge on the radio. Then the news: Soviet leader, Konstantin Chernenko, has died at age of 73.
In a few short years, the Soviet Union went from Leonid Bresnev to Yuri Adropov to Konstantin Chernenko. Now the big question: Who would be the next supreme commander of this communist superpower?
The following day, everyone knew. Mikhail Gorbachev. And Gorbachev would usher in a new age of Perestroika (Russian for restructuring, to kickstart the Soviet economy) and Glasnost (Russian for openness, his policy of a more open government and culture).
With Gorbachev, the US and the USSR began arms control talks in Geneva, Switzerland. This meeting was something the press had been carping about ever since Reagan took office in 1981.
Smith, S K. S*T*C (p. 247). Kindle Edition.
---------
So came the turning point in the Cold War and the breakup of the Soviet Union.
Footnote:
In 1987, President Ronald Reagan issued this challenge to Mr. Gorbachev at Brandenburg Gate in West Germany:
( reference: https://youtu.be/WX00QkvK-mQ    )
And November 9, 1989, the wall came down: Fall of Berlin Wall: How 1989 reshaped the modern world
---------
For a feel of the times, 1984-1986, especially for women breaking into space programs, please feel free to check out:
S*T*C by S. K. Smith @ amazon.com