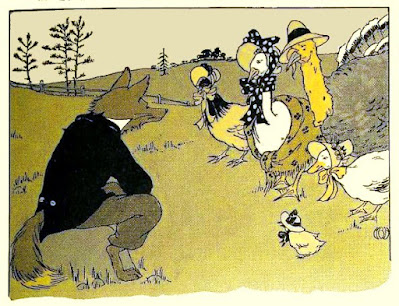 Welcome to the start of a new thread...

We may have a sense of what politics is as we see it everyday, so it seems. But for grins, here's a definition:  merriam-webster

Our elected government servants are politicians, hence they politick. Politics prevails in business, in the office, in commerce, in various organization, in personal relationships,....everywhere.

Often politics has a negative connotation. What comes with the territory is in the struggle for power. One way to get power and and stay in power is to manipulate the masses.

A proven tactic for that...

That's obvious to the casual observer watching the political ads during election season. The opponent and their cohorts are likened to the antichrist and their policies will surely usher in the Apocalypse.

Fables contain that ugly truth of human nature wrapped in a children's story for easy digestion.  One such as

Who hasn't heard the end of the world cry--

The sky is falling!

Here's a darker version of Chicken Little (1943), as shown below in this animation, as told by Disney, during World War II.

Foxy Loxy, through fear, discredits the wise with character assassinations and manipulates Chicken Little, certainly not the brightest bulb in the box. This useful idiot leads his barnyard denizens into the jaws of Foxy Loxy, who not only got Chicken Little, but all the fowls in the barnyard as well.

Yet, the fear tactic is timeless.

Other examples abound, such as in advertising -- hygiene, health, safety, etc... Bad things will happen as we obliviously go about our business. But we'll sell you the product to solve all your problems and assuage all your fears.

A more innocent version of this type of manipulation is found in the musical, The Music Man (1962), about a con man during the early 20th century.

After scoping our the sleepy town of River City, Iowa, Professor Harold Hill searches for an angle to exploit the denizens...using fear. Finding none, he creates one and demonizes the coming pool table.

That's Trouble in River City, with a capital T that rhymes with P and that stands for Pool.

Inciting the fear of moral degradation creeping into the town and its youth, the Professor offers the solution: A boy's band to channel the youth's energies and keep them from the immoral influence of the pool hall.

Then he sells the instruments and uniforms for this band. Yet he has plans all along to bilk these suckers of their money and skip town before delivering on his promises. (But the love of Marian the Librarian complicates his latest con. The Professor lingers, gets caught, and faces the music.)

Creating a problem, inciting fear, profiting from it. Nothing new for foxes to get their dinner or con artists to separate the naïve from their money.

In the words of a politician's inaugural address in the dark days of the Great Depression:

The only thing we have to fear is fear itself.

Posted by smithsk at 3:45 PM No comments: