The picture above is Uros Predic's 1919 painting, inspired by the Serbian poem - The Maiden of Kosovo. During the aftermath of the Battle of Kosovo (1389), the maiden, who is seeking her fiance, gives the fatally wounded Pavle Orlovic some water. At this moment, this Serbian knight gives her the news that her beloved and her brothers are dead. Then Pavle Orlovic dies and passes into legend as well as an epic poem and a famous painting.   [reference: Kosovo Maiden Painting]

Below is a video clip from the movie, The Battle of Kosovo (1989), made for the 600th anniversary of the event.  The scene when the sultan was killed by a Serbian noble dramatizes this long struggle between the Serbs and the Turks:

From the 14th into the 21st century, the battles of Kosovo continue.   Most recent are the Kosovo conflict (1998-1999) and the continuing reprisals into the new century. [reference: Kosovo Conflict]

And if you read some of the comments in YouTube video above, the battle (with words) goes on and on.

Part 6 of the Commander and the Chief (CC) thread looks at this Balkan history.

In this excerpt from Book 1: His Tribe of One, the heroine Dr. Orlovic "the Chief"  and her lineage (she is half Cheyenne and half Serbian) are discussed. Her agent Lord Wise is briefing Colonel Jack Sheffield on Nova's expedition to find her missing husband, Admiral Connor Quinn.

Jack questions Wise about his proposal:


“Remind me, again, why have you come to me with this mystery and not the Americans?” 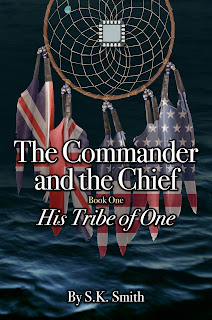 “I come at the request of Dr. Orlovic.”

“Admiral Quinn’s widow, my client, Dr. Nova Orlovic.” Then Wise presented her business card for Chief Rainmaker Winery. A silhouette of an Indian maiden in a war bonnet held a goblet with stars and galaxies bubbling out and surrounding the quote: The whole universe is in a glass of wine.

“Yes, yes, your boss, of course. I forget this bird didn’t take the Admiral’s name.” Jack twirled the card in his fingers. “Orlovic. That’s quite ethnic sounding.”

Wise raised his brown eyebrows. “Her father’s side goes back to the Serbian knights. She’s quite proud of that name.”

“Orlovic, yes. Stuff legends are made of. And I recall that name in War College studying the Battle of Kosovo.” Then Jack raised a corner of his mouth. “But that first name—Nova? Sounds explosively stellar. And I can just imagine what she must be like in bed.”

“No doubt many have, but I assure you she’s a woman of virtue.” Wise returned a fatherly look. “Her name has nothing to do with exploding stars. It’s Indian as in Native American Indian. She has quite a fascinating family history. Father’s side from the Balkans, mother’s side Native American. But that’s another story.”

from Chapter 3: Soldier of Fortune

What about the name of Orlovic, the stuff legends are made of?

Some claims indicate one of Pavle Orlovic's notable descendants is the legendary scientist and inventor Nikola Tesla. [reference: Origin Orlovica]

To find out more about Pavle Orlovic's fictional descendant, Dr. Nova Orlovic, "the Chief" in "The Commander and the Chief," please read the book and its coming sequels.

Photo from:  Wikipedia/The Kosovo Maiden, 1919
Posted by smithsk at 9:02 PM No comments:


Pop Culture reflects the mood and spirit of the times. So during a traumatic event, the right song can become a balm for healing.  Such was the case for this turn-of-the-century song.

In November of 2000, Irish singer Enya released the album, A Day Without Rain. And one of the  singles on that album was - Only Time

In 2000, Enya explained its meaning in an interview:

"I had to stop putting the pressure on myself, because of relationships coming and going, but if relationships aren't working that means they're not right. That's what the single Only Time is about."  [reference:  Enya News: A Day Without Rain Article ]

Then less than a year later, CNN showed scenes of the collapse of the World Trade Center accompanied with Only Time.  [Reference:  Music in American Crime Prevention and Punishment ]

And the video below shows a montage of the events on September 11, 2001:

In response to the terrorist attacks, Only Time resonated with those seeking solace from the storm and looking forward to normalcy as the nation's psyche healed from this wound.

Later, Enya produced a remix of Only Time and donated the earnings of that single to the Uniform Firefighters Association Widows' and Children's Fund. This charity helped the families of those who gave their lives that day.  [reference:  http://enya.sk/a-day-without-rain/only-time ]

Dancing on Top of the World Trade Center (2010)

Photo from:  Montre gousset/Wikipedia.com
Posted by smithsk at 7:48 AM No comments: