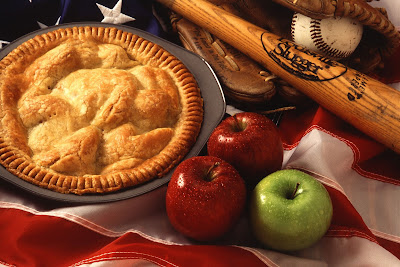 wikipedia/Motherhood and apple pie
What a Country!
That is the catch phrase of Russian immigrant comedian,  Yakov Smirnoff.
Yakov had been an art teacher in Ukraine, then in the 1970s, he made it to the US from the former USSR. Later, in America, he earned a Masters in psychology and Ph.D. in Global Leadership. In between, he did his comedy acts, acted on TV shows and in movies. (reference: IMDb )
After Yakov became an American citizen on July 4, 1986, he starred in a show about immigrants taking classes to pass the American citizen test: What a Country (1986-1987):
( reference: https://youtu.be/IxCzAVuwdFg )
Yakov's acting art on a TV series imitated life.
Many immigrants (like my grandparents) had entered the United States from New York City, so the comedy speaks to many of us. Many came for a better life...freedom...opportunity.
Fifteen years after What a Country! ended, there came the attacks on the Twin Towers, the Pentagon, and a hijacking that ended in a plane crash. September 11, 2001.
And here's the rest of  Yakov's story as the artist:

Paul Harvey - The Rest of the Story from Yakov Smirnoff on Vimeo.