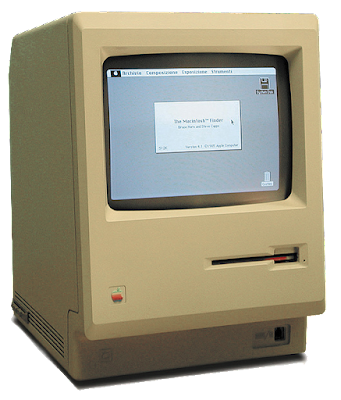 Macintosh/wikipeida.com
1984
Interesting year.
* Ronald Reagan was running for re-election
* Democrat Presidential Candidate Walter Mondale picked Geraldine Ferraro as his running mate, first woman vice president  nominated on a main party ticket
* Winter Olympics were held in Yugoslavia (which no longer exists)
* Summer Olympics were held in Los Angelos and up the West Coast and Russia boycotts them
* The major leaders of the Evil Empire, the USSR, (which no longer exists) were dying off
* The Space Shuttle Challenger was flying
* It was the year of George Orwell's--Nineteen Eight-Four
* This Superbowl ad aired--once:
( reference:  https://youtu.be/zIE-5hg7FoA )
And that ad is referenced in the except below:

Mike Bonacelli, a regular on swings, came into work before shift change. Then he handed in his resignation.

“Why, Mike?” Dan looked up from his desk. He suppressed a smirk, not that disappointed.

Mike’s dark eyes flashed. “I don’t care to get trapped in the golden handcuffs.”

“Where’re you headed?” Rich looked up from his desk.

Mike puffed up his chest. “I got an offer from Apple. Working on Macintoshes—personal computers. It’s the future, where the big money is.”

“Hey, I saw that awesome Apple ad during last year’s Super Bowl,” Rich said. “It only aired once though.”

“Yep,” said Mike. “MacIntosh. The most awaited event of 1984, taking a page from Orwell’s Nineteen Eighty-Four. The girl destroys Big Brother conformity to bring on a future full of new possibilities.”

“So, you’re leaving this job, defending your country, for private industry?” Dan grew a grin as fake as the sincerity in his voice. “All in hopes to be a millionaire?”

“Which is something you lust after, right, Danny boy?”

“Mike, Mike, Mike.” Dan asked with the taint of sarcasm in his voice, “Why would you think such a thing?”

Mike lifted his dark eyebrows. “You talk about it all the time. It’s no secret you just don’t want to be well off. You want to be rich.”

“You want to be like me, Dan?” Rich twitched his dark mustache as Dan shook his head.