Away in a Manger

This was the first Christmas carol that I remember learning to sing.  And I was in kindergarten at the time.

Away in a Manger has been called "Luther's Cradle Hymn" for it had been thought to have been written by Martin Luther for his children.  Though Martin Luther's authorship has been discounted, this carol is beloved by both the young and old alike.  (reference: Away in a Manger: Lyrics and Music)

Below, this carol is sung with all three verses:


When I became a big kid, more aware of the big bad world, this "Luther's Cradle Hymn" had more meaning.   Especially in 1980.

Thirty years ago in America, times were dispiriting - much like today.  If you had lived through the 1970s into the early 1980s, you may remember the Iranian hostage crisis.

On November 4, 1979, Iranian students had stormed the American embassy in Tehran and took some 60 hostages.  The immediate reason for the take-over was anger at President Carter for allowing the Shah of Iran into the United States for cancer treatment.

But revolutionary leader Ayatollah Ruhollah Khomeini was never one to waste a good crisis.  He used the seizure of the US Embassy and American hostages to demonstrate his anti-West defiance and hence raise his domestic and international profile.   (reference:  Iran Hostage Crisis)

This was not a good year nor a good start for the decade.  America continued to be humiliated in the eyes of the world as we seemed so helpless to do anything to rescue our countrymen.  And this impotence only added to the malaise of the economic problems of high inflation and the energy crisis endemic in the late 1970s.

Early in 1980, there was a bit of good news.  Six American diplomats had evaded capture and sought refuge in the Canadian and Swedish Embassies. The end of January 1980, they were smuggled out of Iran in disguise as Canadian citizens.   (reference:  The True Story Behind Operation “Argo” to Rescue Americans From Iran)

The real story behind this covert rescue was kept secret for 17 years.  But this year, 2012, a movie was released about this amazing rescue called -


But the rest of 1980, the remaining hostages did not fair so well.  In April, a failed rescue attempt to free them led to the death of eight American servicemen and more international humiliation.  (reference: The Failed Rescue of American Hostages in Iran – Background and Consequences of a Failed Rescue )  Though few hostages had been freed - some women, minorities, and one who suffered from MS - 52 Americans endured 444 days of captivity.   (reference: Unique Facts about the Middle East: Iran Hostage Crisis)

And President Carter took a big hit for this and doomed his re-election, as in November of 1980 he lost to his challenger, Governor Ronald Reagan.  (reference: United States presidential election of 1980)  As 1980 drew to a close, the 52 would spend a second Christmas in captivity and lose an entire year of their normal lives.

One of the two women hostages that endured the entire 444 days was Iowa native, Kathyrn Koob, who was serving as director of the Iranian-American Society when the embassy was stormed.   (reference:  Where Are They Now? Iranian Hostage Crisis: American Kathryn Koob)

Be near me, Lord Jesus, I ask Thee to stay
Close by me forever, and love me I pray;
Bless all the dear children in Thy tender care,
And take us to heaven to live with Thee there.
Verse 3: John Thomas McFarland

I remember when she sang that song during the news.  It brought me to tears.  They were tears of sadness, but also tears of hope.

Ms. Koob, who was raised in the Lutheran tradition, spent the 444 days of her captivity in prayer, developing her spiritual life, especially learning the call of Jesus to  love your enemies.  (Luke 6:27-28)  And that Christmas in 1980, she had expressed her faith during this dark time singing Luther's Cradle Hymn.

Her ordeal would come to an end in a month in early 1981.  A few hours after Ronald Reagan was sworn in as the 40th President of the United States, the 52 hostages were released.

It is more than thirty years later, and we still live in dispiriting times.

Unemployment is still high.  Many are underemployed.  Many have given up looking for work.  Many are troubled and fear an uncertain future.  And in recent news, December 14, 2012, the unspeakable happened with the massacre of children at the Sandy Hook Elementary in Newtown, Connecticut.  (reference:  School shooting reported in Newtown, Conn.)

It seems the world has gone mad.

But these were the times that Kathryn Koob had lived through as a hostage in Iran.  And I draw hope from her story as we, in these troubled times, may draw strength from above and continue to


Blessed is the nation whose God is the Lord,
the people he chose for his inheritance.

Photo from everystockphoto.com:  The Nativity
Posted by smithsk at 8:24 PM No comments: 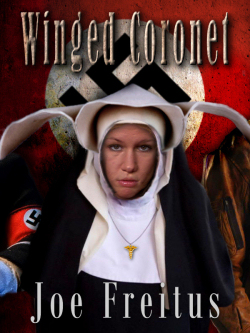 Photo from SynergEbooks:  Winged Coronet
Posted by smithsk at 8:14 PM No comments: