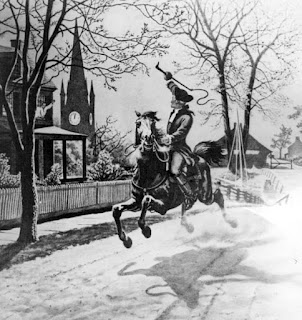 The Shot heard around the World!

This phrase has come to represent the beginning of many historical events - like the American Revolution (1775 - 1783).

"Here once the embattled farmers stood,
And fired the shot heard round the world ..."

Emerson words immortalized the American Minutemen resistance to the British forces back in 1775, as the British were on a mission to seize and destroy the American militia ammunition and weapons.

...and early morning the following day ..

Paul Revere crossed the Charles River and rode to Lexington to warn Samuel Adams and John Hancock that British troops were coming.

One if by Land, Two if by sea

To alert the Charlestown colonists of the British troop movement, Revere had instructed the sexton to signal by the code of the number of lanterns set in the tower of Boston's North Church.  From the other side of the Charles River, Revere spied the two lanterns to indicate the British would be crossing the river ... "by sea."

Paul Revere with William Dawes and Dr. Samuel Prescott continued on toward Concord, warning many along the way.  Revere and Dawes were stopped by the British, but Prescott got away to finish the ride to Lexington.

Henry Wadsworth Longfellow wrote this poem in 1860 lionizing this event that ignited the Revolutionary War.  It's told through the eyes of the landlord and has become a classic in American culture.  Fortunately, for kids and big kids, too, Warner Brothers did an animated version of this poem with characters from their Animaniacs.  Here is the story as told by The Flame.

The genius of this animated clip is to make American history and literature entertaining as well as educational ... while most of us don't even know it.  Cartoons convey the culture, especially in this age of satellite TV and the internet.  And that need not be a curse - it can be a good thing.

As noted in the part 1 of Culture 101, Ronald Reagan had expressed in his farewell address  for carrying on the American culture -

"An informed patriotism is what we want. And are we doing a good enough job teaching our children what is and what she represents in the long history of the world? ...
...
"The movies celebrated democratic values and implicitly reinforced the idea that was special. TV was like that, too, through the mid-sixties."

And Reagan's warning reverberates into the 21st century.

"I'm warning of an eradication of the American memory that could result, ultimately, in an erosion of the American spirit. ...
...
"Younger parents aren't sure that an unambivalent appreciation of is the right thing to teach modern children."

Have we heeded this warning given almost 25 years ago?

It seems we haven't as so many kids don't know ... or don't have it as a priority to know ... the basics in American history and culture as shown in this clip below.


"We've got to do a better job of getting across that is freedom -- freedom of speech, freedom of religion, freedom of enterprise. And freedom is special and rare. It's fragile; it needs protection."
But there is some hope ....

Some of the Animaniacs cartoons do just that - entertain as well as educate us about our special American culture.

Nothing new under the sun?

Likewise, Reagan's warning is nothing new, but needs to be repeated every generation.  In the Good Book, Moses likewise encourages God's people to impress the Lord's commandments upon the children as well as adults -