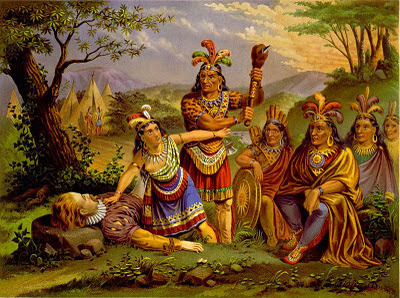 November, many of us Americans may reflect on Thanksgiving.

It is the quintessential American holiday. English pilgrims, seeking religious freedom, boarded the Mayflower at Plymouth, England to go west - crossing the Atlantic. And they landed at Cape Cod (Massachusetts) on Plymouth Rock in 1620.

Half did not survive the winter. But with the providential help of Squanto from the Wampanoag tribe, the pilgrims cultivated the land and forged an alliance with the Native Americans - one that would last for more than 50 years.

In 1621, the pilgrims celebrated the harvest with a feast - considered America's first Thanksgiving - where they invited their Native American allies. Two very different cultures - for a time - were at peace.

But 13 years before the Mayflower ...

John Smith, who had become known as a troublemaker, was put in irons during most of the voyage to America. Most ironic for his countrymen, the lock box when opened in the New World revealed that John Smith was to be one of the seven leaders chosen by the Virginia Company, whom King James I had granted the charter to colonize Virginia. Later, John Smith was elected as the president of the colony. He really showed them.

Among John Smith's adventures, which he recorded later in 1624, was that he and two English companions had been ambushed by the Native American Indians and held captive for two months. Powhatan, the chief, had condemned John Smith to be clubbed to death, whereas the chief's daughter Pocahontas thwarted the plan - throwing herself between Smith and his attackers, causing her father to relent. Though many doubt this exact story - there were no other corroborating accounts, the Pocahontas legend lived on to this day in American and Native American folklore.

Pocahontas was later kidnapped, then married an English tobacco farmer John Rolfe, and they had a child, Thomas. She died in England in 1617, but her descendants include relatives of American presidents. Among them are Thomas Jefferson's son-in-law, Thomas Mann Randolph, Jr., and Edith Wilson, the wife of President Woodrow Wilson.

In the late 20th century, the legend of John Smith and Pocahontas - wouldn't you know - was made into a feature length Disney cartoon -

Based on some true historic events, this kid's movie took much artist license, such as a gorgeous Native American Indian princess with a cute raccoon sidekick regularly conversing with Grandmother Willow, a tree, for sage advice. Yet, the legend was a good yarn and Disney often places great truths in its movies so us big kids as well as the young ones can digest them.

The following video clip dramatizes the reaction of the capture of John Smith and his pending execution:

This worldview (both of the English and Native Americans in the clip) is the justification for much of the conflict in this world as well as the rationalization for other bad behavior. Xenophobia often runs the gamut from simply shunning a classmate who is different to the outright genocide of a people .

In William Shakespeare's Merchant of Venice, the differences between people - not like us, yet much like us - is eloquently put in Shylock's speech from Act 3, Scene 1

And in this video clip, the legendary Pocahontas has the solution ....

The God revealed in the Bible - both Old Testament and New Testament - is a God of love.

When Jesus was asked what the greatest commandment was, He did not pick one of the Ten. But He quoted from the Law of Moses in Leviticus and Deuteronomy.

Talking about these same verses from the Law of Moses on a different occasion, a man asked Jesus - “And who is my neighbor?”

This was the lead into the story of the Good Samaritan ... someone, who in the eyes of the Jews of that day was despised because - he was not like them. As for those who are familiar with this story know, the despised person of the "wrong" religion, a "half breed" race of Jew and pagan, helped the man in need, a victim of assault and robbery, while the victim's own countrymen (a priest, a Levite) chose not to get involved.

At the end of the parable, Jesus asks -

36 “Which of these three do you think was a neighbor to the man who fell into the hands of robbers?”
37 The expert in the law replied, “The one who had mercy on him.”
Jesus told him, “Go and do likewise.”

The story of Pocahontas is one of the triumph of love and mercy shown to those who are not like us. She is truly a role model and a great heroine.

And the legend of John Smith and Pocahontas as well as the first American Thanksgiving are part of America's Story, which is


... and some great Thanksgiving eCards from DaySpring.com:

Thanksgiving is a time to reflect

Other posts on Disney films:

(In my opinion, the Disney version of Mary Poppins, when the kid stuff of magic and silly songs was stripped away, had a serious message about the importance of fathers in the lives of their children. And as you see I blogged much about it.)