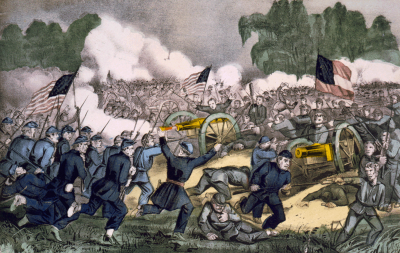 One hundred fifty years ago, Civil War broke out in the United States. In my opinion, this war was the worst war in our 235 + year history. It divided us as a people on many issues - slavery only one of them. The casualties - including both the Union and Confederate soldiers - were the greatest of any of our wars - even the American casualties during World War II - the worst war of the 20th century.

The song below give a sense of the intensity of the fighting during the Civil War:


The turning point in favor of the Union, some historians believe, was the Battle of Gettysburg. The causalities for both the Union and the Confederates was 51,000 in this one battle alone over three days of fighting (July 1 to July 3, 1863). Compare these causalities to the 58,000 deaths over 20 years in the Vietnam War (1955- 1975). Gettysburg was a terrible battle.

On November 19, 1863 - almost 150 years ago - Abraham Lincoln read a few words at the dedication of the Soldiers' National Cemetery in Gettysburg, Pennsylvania. He spoke for only two minutes. But these few words redefined us as a people and became a balm to begin healing the wounds that had so grievously divided us.

Many voices have re-read this speech since then. The version below, eloquently read by Johnny Cash, displays iconic images in American history spanning four centuries - 18th, 19th, 20th, 21st.


Some rank this speech as one of the greatest speeches in American history, if not in the top ten of the greatest historic speeches of all time ... and we are still talking about. And this speech was first given by the 16th president of the United States on November 19, 1863.

The Gettysburg Address is part of America's Story, which is