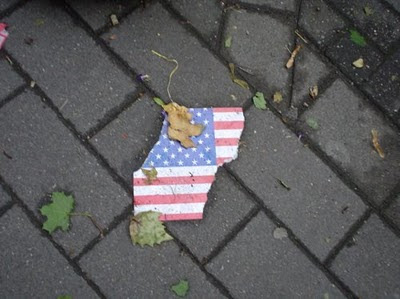 Recent polls , such as this one, America's Best Days - Rasmussen Reports™, indicate many believe that America is in decline. And our president has seemed to have embraced this narrative in this news article: Obama Calls America “Soft,” Offers To Whip Nation Into Shape.

There is merit to this conclusion as all great nations of the past have gone into decline and litter the dust bin of history.

To quote Will Durant:


A great civilization is not conquered from without
until it has destroyed itself within.

America sliding down into the abyss?

In our short 235 year history, our decline looked imminent as we faced many daunting trials - even those of our own making. Here are a few of them.

The Civil War, 150 years ago, ripped our country apart and divided us as a people. It ended with the greatest number of American casualities to this day (even World War II) if we factor in both the Union and the Confederates. Shortly after the end of the war, one of our greatest presidents, Abraham Lincoln, was assassinated, then his successor Andrew Johnson was impeached.

The stock market crash of 1929 triggered the Great Depression marked by the misery of massive unemployment, banking crises, long bread lines, record foreclosures. The Dust Bowl of the 1930s seemed like a judgment of biblical proportion. World War Two pulled us out the economic depression, but at a terrible price, sucking us into a horrific war that tore our world apart. Holocausts. Genocides. Over 70 million deaths by some estimates.

The Cold War threatened Mutual Assured Destruction as Communism spread across the globe. Better Red than Dead? Half of Europe went behind the Iron Curtain, most of Asia, the Bamboo Curtain. The Vietnam War ripped the country apart, again, as the counterculture challenged the establishment.

After Vietnam came to an ignoble end, the malaise of the Carter years ushered an era of energy shortages, high inflation, the national humiliation of the Iran Hostage Crisis. When Reagan took office, the country was in a deep recession with high inflation and we seemed dispirited as a people.

Shining City upon a Hill?

Many times in our history, it looked like it we were tailspinning into a downward spiral of permanent decline. Many doubted we would or even could recover during our difficult days. Yet, these words in Reagan's Final Address to nation offer some steps we can take to pull out of a nose dive.


And the wisdom of Solomon offers this prescription to reverse a decline, if we are willing:

Washington and Lincoln leave us with this encouragement: Our faithful heritage


Question: Any thoughts on reversing the decline?

Picture from everystockphoto.com: Torn Flag
Posted by smithsk at 12:35 PM