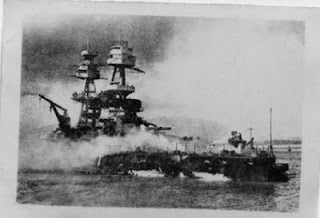 My mother-in-law wrote down memories about World War II in this article: World War Two - before, during, and after.

During the Great Depression, my father-in-law had been in college ROTC and was commissioned as a Lieutenant in the Army. He was scheduled to be discharged January 1942, but December 7, 1941 changed all that.

The next day, President Roosevelt delivered his "Pearl Harbor Address to the Nation:"

"Yesterday, December 7th, 1941 -- a date which will live in infamy -- the United States of America was suddenly and deliberately attacked by naval and air forces of the Empire of Japan. ...
No matter how long it may take us to overcome this premeditated invasion, the American people in their righteous might will win through to absolute victory. ..."

Four days after Pearl Harbor, Hitler declared war on the United States. As a result, my father-in-law was first sent to North Africa, then Sicily to fight in the European Theater. Later, he waited in England where he would be part of the invasion into France on D-Day + 4. After the liberation, he witnessed the horror of the concentration camps.

In this deadliest conflict of human history, when the war was over, more than 70 million people (military and civilian) lost their lives.

The 2001 mini-series, produced by Stephen Spielberg and Tom Hanks, "Band of Brothers" chronicled what the soldiers of Easy Company had endured during the war. It was based on the Stephen Ambrose book of the same name, which gets its title from the St. Crispen's Day Speech in Shakespeare's Henry V .

The video clip below show Easy Company's first encounter with a concentration camp inside Germany. These images give a glimpse of what my father-in-law had experienced in Europe.

After the war, my father-in-law made a career in the Army. When stationed in West Germany, he took his sons to the Dachau concentration camp site, as a lesson in man's inhumanity to man and why we had fought this war. He passed away a few years ago on Pearl Harbor Day.


Other links honoring World War Two Soldiers and all those in harm's way, who guard our freedoms:


Related links:
photo from everystockphoto.com: Pearl Harbor
Posted by smithsk at 9:00 AM