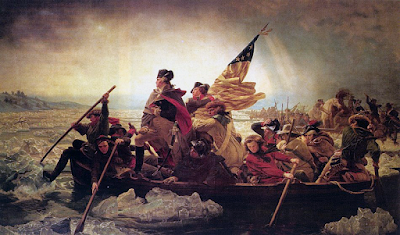 1776 was a watershed year in American History. July 4th, the colonies had declared independence from Britain. And so the American Revolutionary War (1775 - 1783) continued.

By December 1776, prospects of victory seemed remote for the Continental Army. The British had driven General Washington from New York to retreat to Pennsylvania. The annual enlistment of the American soldiers were expiring at the end of the year and funds as well as morale were low. If there was every a need for a Christmas miracle, it was needed in 1776.

In this bleak setting on Christmas Day, General Washington made a daring move to attack the enemy, crossing the Delaware River into New Jersey. The day after Christmas, Washington caught the Hessians by surprise and won the Battle of Trenton. That victory boost the morale of the Continentals and spurred the troops to continue fighting and eventually win the war.

For our first American Christmas in 1776, we got a priceless present from our founding fathers and mothers - Freedom!

Likewise, on the first Christmas, which we celebrate the incarnation of the Son of God, we can receive the ultimate gift of Freedom:

If the Son therefore shall make you free, ye shall be free indeed.
(John 8:36,King James Version)