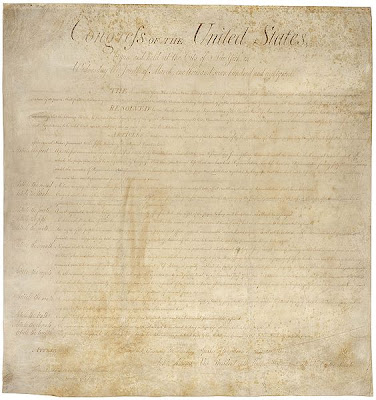 December 15th should be celebrated by all Americans. On this day in 1791, the first ten amendments to the US Constitution, the Bill of Rights, were ratified by three-fourths of the States. This document secured our freedoms as much (or more so) as the signing of the Declaration of Independence on July 4, 1776. It still lives and serves to prevent us from repeating the mistakes of our past. 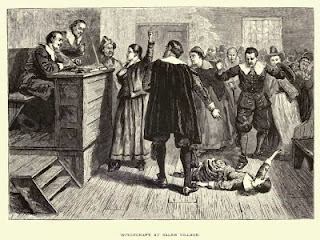 One of the dark periods of American history was The Salem Witch Trials. In 1692, hundreds faced accusations of witchcraft; 19 people were tried and hung for it; an 80 year old man pressed to death for refusing to submit to a trial; dozens languished in jail for months without trials.

What were they thinking?

The philosopher George Santayana had said: "Those who cannot learn from history are doomed to repeat it."

With the Bill of Rights added to our Constitution, our founding fathers did learn from history. When enforced, the first ten amendments can avert human rights violations, such as what happened in the Salem Witch Trials.

Let's look at some of these rights:

First Amendment: freedom of speech, of the press, freedom of religion, and of assembly; right to petition

Congress shall make no law respecting an establishment of religion, or prohibiting the free exercise thereof; or abridging the freedom of speech, or of the press; or the right of the people peaceably to assemble, and to petition the government for a redress of grievances.


Fourth Amendment: protection from unreasonable search and seizure
The right of the people to be secure in their persons, houses, papers, and effects, against unreasonable searches and seizures, shall not be violated, and no warrants shall issue, but upon probable cause, supported by oath or affirmation, and particularly describing the place to be searched, and the persons or things to be seized.


Fifth Amendment: due process, double jeopardy, self-incrimination
No person shall be held to answer for a capital, or otherwise infamous crime, unless on a presentment or indictment of a grand jury, except in cases arising in the land or naval forces, or in the militia, when in actual service in time of war or public danger; nor shall any person be subject for the same offense to be twice put in jeopardy of life or limb; nor shall be compelled in any criminal case to be a witness against himself, nor be deprived of life, liberty, or property, without due process of law; nor shall private property be taken for public use, without just compensation.

In all criminal prosecutions, the accused shall enjoy the right to a speedy and public trial, by an impartial jury of the state and district wherein the crime shall have been committed, which district shall have been previously ascertained by law, and to be informed of the nature and cause of the accusation; to be confronted with the witnesses against him; to have compulsory process for obtaining witnesses in his favor, and to have the assistance of counsel for his defense.

Excessive bail shall not be required, nor excessive fines imposed, nor cruel and unusual punishments inflicted.


I cannot think of any major country in the world where such freedoms are given to their citizens. Can you?
With that in mind, Thomas Jefferson has been attributed to say:
"The price of freedom is eternal vigilance."
Freedom isn't free