Dollar coins that its.

In the 1970s, there was a campaign to move from paper dollars to coins.

The currency life of coins was much longer than that of paper bills. Hence, in the long run that would save money.
(In defense of the dollar coin - The Washington Post)

But in recent times dollar coins have hit public resistance and didn't seem to catch on.

The Eisenhower dollars, which were minted in the early 1970s, seemed too big and clumsy to carry around as pocket change. Yes, we have had silver dollars for some time, but since we went off the gold standard, silver dollars have became much more valuable than ... a dollar. It's called inflation. (Silver History)

So our government tried some good PR to coax the public into liking dollar coins, again. And what better way than to appeal to half of the population - women. Up to 1979 there were no US coins honoring women. This idea should sell big.

So in 1979 the mint honored suffragette Susan B. Anthony on the first new dollar coin, since the one honoring President Eisenhower. They are often nicknamed - "Suzy Bs" (Susan B. Anthony dollar (1979–1981; 1999))

Again, like the Eisenhower dollar, Suzy Bs were not that popular, though there was an attempt to make them appealing by their small size - about that of a quarter. But that proved to be a problem as they were often mistaken for a quarter.

And at the end of the Carter administration, when the country was plagued with high inflation, the shrinking size of the dollar coin (from the large Eisenhower coin) to the quarter-sized Suzy B seemed very symbolic of the woes of the economy. The public didn't take to it.

Two decades later, a new design was born - a gold color dollar coin - perhaps one that didn't look so much like a quarter? And you guessed it - perhaps the picture above gave a clue - in 2000 Sacajawea graced the next generation of dollar coins . And there was quite a story behind this. (Sacagawea Dollar Profile - The Sacagawea Golden Dollar)

One day while camping in the parks ...

As mentioned in another thread, Signs of the Times (part 1) - Camping in the Parks, we have stretched out our vacation dollars by ... camping in the parks. And last year, one of our destinations was the Yellowstone/Grand Tetons. 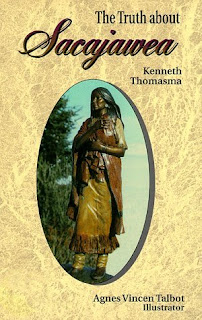 One evening in the Tetons, we were planning to attend a nature talk, but it had been cancelled. Instead, we found another talk nearby - Kenneth Thomasma stumping his book - The Truth about Sacajawea.

In fact, this book, which came out in 1997, was used to lobby for Sacajawea as the choice on the obverse of the new dollar coin to replace the Suzy Bs. And it was a great choice as this teenage mother has quite an important place in American history.

And most appropriate, what better time to tell this story than in November which has been designated as ...

Horace Greeley has been credited with saying
Go west, young man ....
which he most likely did not say, and John Soule, who actually said it, was misquoted, anyway.
(Go West, Young Man!)

Yet, Western expansion was an exciting time in American history. The video clip below from Schoolhouse Rock gives a quick overview of it. And it mentions Sacajawea was an important guide in the Lewis and Clark Expedition during this part of America's story.

There have been so many Sacajawea legions, but Kenneth Thomasma's book gets as close as anyone can to the truth. His primary source is the words written by Captain Lewis and Captain Clark and others during their expedition

The book is less than 90 pages mostly from journal entries about Sacajawea. The author inserts some comments of events and background for continuity. This candid log gives testimony as to what a remarkable woman Sacajawea really was.

Here is a flavor of those times juxtaposed with events in early American history:

George Washington was in the process of being elected the first president of the United States under the Constitution. And he would serve from 1789 - 1797. (George Washington | The White House)

Meanwhile, a Lehmi Shoshoni girl, Sacajawea, was born in the west in a territory we know today as Idaho. In the 18th century, to be born a Native American Indian girl was considered one of the lowliest births in the social statuses of the time.
(Her childhood - page 1 | Sacajawea)

Growing up, Sacajawea would be taught many valuable skills for the survival for her people, which included management of the camp, gathering and preparing food, making clothing, and countless other skills needed to keep her people alive and well.
(Her childhood - page 2 | Sacajawea and the following pages)

In 1800, John Adams was finishing his term as the second president of the United States (1797 - 1801).
(John Adams | The White House)  President Adams ran for re-election that year, but was defeated by Thomas Jefferson.

Meanwhile in the west, when Sacajawea was about 12 years old, she and several others were kidnapped by the Hadatsa Native American Indian tribes after a battle with her people, the Lemhi Shoshoni. She was taken to a village in the area of present day North Dakota. Native girls back then were prized for their survival skills and work ethic.
(Taken from her home - page 7 | Sacajawea and the following pages)

About this time, French-speaking Canadian trapper,Toussaint Charbonneau, took Sacajawea as one of his wives. Legend has it, he won her while gambling.
(Life with Charbonneau - page 12 | Sacajawea and following pages)

Meanwhile, Napoleon Bonaparte had ambitions to build an empire in North America. But a slave revolt in Haiti and looming war with Britain convinced the French emperor to sell the territory to the United States to raise cash. Thus in 1803, the deal became knows as the Lousiness Purchase. 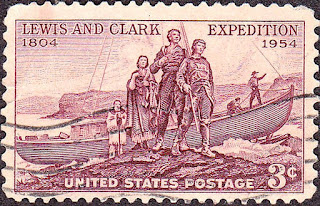 As a result of the Louisiana Purchase, Thomas Jefferson commissioned Meriwether Lewis and William Clark to explore the territory as well as search for a passage to the Pacific.

In 1804, the Corps of Discovery traveled up the Missouri River and eventually wintered in North Dakota. Here the expedition hired French-Canadian trapper Charbonneau and one of his wives, a teenager pregnant at the time with their first child, to help translate for them. It was here Sacajawea steps onto the pages of America history.

Sacajawea would soon give birth to John Baptiste Charbonneau and embark on an expedition of five thousand miles with her infant son. The captains learned that taking this teenage mother with them was the most fortunate thing they could have done for the success of their expedition.
(Life with Charbonneau - page 12 | Sacajawea and the following pages)

Kenneth Thomasma's book give the details of the journal entries from the captains and their men, but here are a few examples.

Sacajawea kept a cool head during many crises. One such occasion was when the canoe she was in tipped over, and she got busy, putting herself in harms way, to save irreplaceable cargo. The captains realized she was as valuable or more so than any man in their army, as this note in the diary indicates  -

Thursday, May 16, 1805 Captain Lewis
"Sacajawea demonstrated fortitude and resolution equal to that of any man on board the stricken craft. She saved most the bundles which had been washed overboard."

And they held a very high opinion of her as shown how anxious they were when she had gotten ill and was near death on at least four occasions. They realized their success depended on her.

Saturday, June 16, 1805 Captain Lewis
"When Lewis returns to camp in the early afternoon, Sacajawea is near death. Four-month-old John Baptiste is held in the arms of his ailing mother. Lewis is extremely concerned not only for both of them but also for the expeditions's needs for an interpreter who can speak with the Shoshoni people.."

Meanwhile, Charbonneau did not rate such high marks. He often panicked, lost his head, and did the wrong thing that harmed the expedition. A disgraceful event recorded in both the captain's logs indicates how both captains were disgusted with Charbonneau for his abuse of Sacajawea.

This abuse probably happened more than once. And the captain's journals tarnished Charbonneau's reputation among journalists and historians.

Sacajawea was not the only guide, but she was an important guide, as during their westward trek she recognized many regions in her native lands.

Many places in Montana bear the names she gave them, such as Beaverhead Rock.  (Lewis and Clark in History - August 8 - 14, 1805)  And several places were named after her.  (list of things named after Sacagawea)

Likewise, because of her training as a child, she was an expert at finding food when it was scarce and keeping the men in the expedition in good health.
(Woman Spirit - Sacajawea - Shoshoni)

Native American Indian tribes did not attack the expedition, for seeing the presence of the mother with her child indicated that this was a peaceful party. The captains noted the calming effect she had on their encounters with the natives.
(Searching for Sacagawea: Her Journey)

When the expedition needed horses, it was fortunate Sacajawea was reunited with her family. (Her Journey: August 1805)

And this helped the expedition push to the Pacific and back home again. There is much more to tell ... so read the book.

When the expedition was over,William Clark adopted Sacajawea's son in 1809, and John Baptiste Charbonneau led an adventurous and interesting life. (more info: pbs: lewis and clark)   Unfortunately, his mother did not live to see his success, none-the-less receive the accolades for her marvelous contributions during her short lifetime.  In 1812, Sacajawea passed away from "putrid fever" in what we know today as South Dakota. (Her final journey - page 21 | Sacajawea)

And Sacajawea and her indomitable spirit and contribution to the expansion of our nation is part of America's Story,
which is to be continued ...