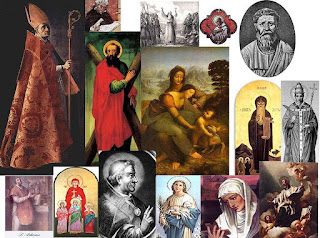 The remarkable Margery Kempe made a career of pursuing sainthood. And she left us a valuable record of her adventures and everyday life in medieval times by dictating her memoirs in 1438. Though this medieval mystic had her shortcomings - as pointed out in my last post, Part 3: Medieval "Church Lady" - Margery had many admirable qualities.

Here a five of them:

1. Her passion for a direct and personal relationship with God

After a very difficult pregnancy, Margery had become very ill - both physically and mentally. When she thought she was going to die and go to hell, amid hallucinations of devils, she had a vision of Christ, who spoke to her: "Dowyter, why hast thow forsakyn me and I forsoke nevyr thee?"

Margery felt peace and happiness after that experience as she soon made a dramatic recovery of her health and sanity. Her peers saw this sudden turnaround as a miracle and Margery believed Jesus had rescued her from the Devil's clutches.

Since her healing followed by some humbling experiences of failed business ventures, Margery had more visions. (Some may say she was crazy. But who can tell?) Her supporters suggested that Margery's true calling was to follow Christ. And with much passion, Margery sought to directly commune with God and pursue sainthood with all her heart. This "coming to Jesus" was not just a passing fad, but one that lasted throughout her lifetime.

During Margery's life in the late 1300s and early 1400s, the organized Church had sunk to one of her low points. The Church was being torn by the Great Schism, when three popes reigned at one time. The clergy seemed disconnected from the people and more interested in wealth, building great cathedrals and names for themselves, and advancing their own political careers than in feeding their flocks.

More than a hundred years before the Reformation, Margery desired to break down this barrier between laity and clergy and commune personally and directly with God. David had expressed that same burning desire for communion in his psalms. (Psalm 27:8; Psalm 40:8; Psalm 42:1) Likewise, St. Paul had the desire for knowing Christ. (1 Corinthians 2:2; Philippians 3:10)

Margery challenges me to have that same passion and not lapse into the coldness of complacency.

2. Her courage and stamina

In her desire to get closer to God, Margery did what many of the pious tried to do in her day - go on pilgrimage. Medieval life was dangerous as it was, but even more so as a woman traveling alone, most of the time on foot. Margery made the pilgrimage to the Holy Land and many other shorter pilgrimages to shrines throughout Europe. She had a confidence that God would see her through. She faced danger from illness, travel, and hostile company. She got herself into many scrapes, but was delivered from them all. Pilgrimages were not for the faint of heart and she had the stamina and will to push on.

I think of St. Paul on his missionary journeys - most on foot - and all the perils and dangers he had faced, including a shipwreck (2 Corinthians 11:24-28). Margery had a taste of something St. Paul went through on pilgrimage on foot across much of Europe, on sea in the Mediterranean, the Atlantic Ocean, and the North Sea, during times of peace and war, and in fear of bandits, pirates, evil doers, illness, and many other perils.

I wish I had Margery's courage and strength to keep going on my "Pilgrim's Progress" - especially when life seems scary and difficult.

3. Her conviction and perseverance

Once Margery's mind was made up, nothing deterred her from her goals as she pushed forward with pigheaded stubbornness. Her countrymen on pilgrimage had ditched her many times, but she never gave up, continued on, and found them - again. This terrified them.

St. James gives warning of the double minded man (James 1:8). Margery did not have that problem. St. Paul preached perseverance in not growing weary in well-doing (Galatians 6:9). And Jesus told parables of persistence (Luke 18:1-7).

I covet Margery's stick-to-it-iveness. She was not one to be deterred from her goal.

Though illiterate,Margery had priests read to her from the Bible and other sacred literature. The readings helped the priests as well as Margery to know the Holy Writ better as well as important writings of religious scholars.

In England, John Wycliffe (who first translated the Bible into English) and his disciples, the Lollards, challenged the authority of the Church. This left the leaders quite testy and suspicious of an outspoken woman as Margery. Her detractors had accused her of being a Lollard, which put her at risk as being labeled as a hectic and in real danger of losing her life. (Czech priest John Hus had been burned at the stake in Rome in 1415 about the time Margery had visited on pilgrimage.)

When brought before inquisitions of priests, politicians, and bishops at various times, Margery took them all on and answered them very intelligently. She convinced them all she was a faithful orthodox Catholic and even got the Archbishop of Canterbury's certificate of approval, which made her autobiography "safe" to read.

I am challenged to have that same readiness to give intelligent answers about my faith like Margery had done throughout her many trials.

5. Margery had a testimony

Though her fellow pilgrims had ditched her many times and her neighbors had made fun of her, they must have wondered if she really did have a connection to the Almighty.

In Venice on pilgrimage to the Holy Land, Margery changed sailing vessels as in her account the Lord had given her warning about the craft her fellow pilgrims would embark on. Her companions must have thought this was a great stroke of luck as they were finally rid of this irritating woman that followed them doggedly throughout Europe.

The voyage on a stinking galley across the Mediterranean was fraught with perils from the storms at sea, pirates, and the crew, many whom were criminals and men if ill repute. Margery's countrymen must have had second thoughts about their boat as they bit their tongues, and with extra cost and difficulty changed their plans and went with Margery on her vessel of choice. We do know they all arrived safely at the port of Jerusalem in Jaffa.

Later, in her home town of Lynn, Margery had become a joke - an object of abuse. But during the "Great Fire" that swept through the town, Margery wept quite loudly and prayed. This time, those - who had ridiculed her before - now begged her to continue praying. The sky, which had been clear, suddenly turned dark and a great snow storm came rushing in. The citizens of Lynn now had the fire under control. Everyone seemed to agree that the storm that quenched the fire was due to Margery's efforts.

The New Testament saints had testimonies. When St. Paul was a prisoner on ship, the crew did not heed his warnings, but later they all took his advice and were kept safe because of his testimony. (Acts 27) St. Peter urges that because of a good testimony, evil doers will be ashamed (1 Peter 3:16). Many scoffers had to eat their words when they sought Margery's prayers in a time of trouble.

I desire to have a testimony as strong as Margery's, especially one that my enemies take notice.

Though Margery had her failings, she bears witness to a faith that did not fail and a constancy of her convictions. Searching the web, I did not see that she was canonized as a Catholic saint. In the Protestant definition, a saint is any believer, set aside for God. (Ephesians 1:1;  Philippians 1:1; Colossians 1:2) Her testimony still speaks through the centuries as she was as a saint in medieval England.


Question: Does Margery speak to you today?

Picture from Wiki Commons: Saints of the Catholic Church
Posted by smithsk at 9:50 AM