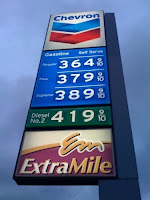 During the energy crisis, Peak Oil was quite the buzz in the blogosphere. Remember when gasoline approached, if not passed, $5.00 per gallon? The gnawing thought in the back of my brain is when gas will shoot up like that, again.

Dr. Bartlett articulated the Peak Oil concept during his “Arithmetic, Population and Energy” speech at the 2009 EntConnect conference. Actually, I first heard Dr. Bartlett’s lecture during the 1970s energy crisis and he still had many of those same charts. Key indicators pointed that, at a steady rate of consumption, the world’s oil production would peak, sometime in the late 1990s or early 2000s. That is, like, now, and we are living on borrowed time.

As shown in the doubling of grain on the chess board, consumption during the next doubling period is always greater than all that of previous history. Therefore, even a modest growth of consumption can escalate very quickly.

At a convention of petroleum geologists and engineers in 1956, the late Dr. Hubbert presented his calculations that “the peak of US oil and gas production could be expected to occur between 1966 and 1971.” No one took him seriously then. Yet, the data from the Department of Energy showed that the actual peak was 1970, followed by a very rapid decline.

Professor Bartlett put forth his famous quote on the public perception of energy consumption: “The greatest shortcoming of the human race is our inability to understand the exponential function.”

Remember the last blog of the splitting bacteria in the jar? Assume the world’s oil reserves equal the amount we have already used in the history of the planet.

One more doubling time (10 years for 7% growth), the world’s oil reserve will be consumed.

As the legendary Chinese curse says – May we live in interesting times.