I clearly remember that day of the Memorial Day weekend in 1971. My mother looked at the morning newspaper and said that, mourning a loss of a great American hero, who perished in an airplane crash.

Frankly, a teenager at the time, I really didn't know anything about Audie Murphy. Yes, this dates me as a baby-boomer, whose parents were, as Tom Brakow coined the word: The Greatest Generation. My parents lived through the Great Depression, which ended with the onset of World War II.

I later learned one of the greatest heroes of that war was Audie Murphy.  In fact, he was the most decorated World War II combat soldier, perhaps in all American history. [reference: Audie Murphy Facts]

And this soldier is the subject of part 5 of the CC (The Commander and the Chief) thread.

The first book of The Commander and the Chief series, His Tribe of One, makes a reference to Audie Murphy.

In this scene, Lord Wise briefs Colonel Jack Sheffield about another American hero, Admiral Connor Quinn, at a London tavern. The Admiral had died mysteriously and his widow is assembling a team to get to the bottom of his accident.


“Back to Admiral Quinn,” Jack continued when they were alone, “word is, as a POW, he talked Yasser Nasser out of deploying his nukes, surrendering to the allies, and destroying all his weapons of mass destruction. That feat is legendary. Surely it’ll go down in the annals of military history.”
“Quite.” Wise put away his reading glasses. “And not long after the war, the Admiral and Yasser Nasser were awarded the Alfred Peace Prize.” 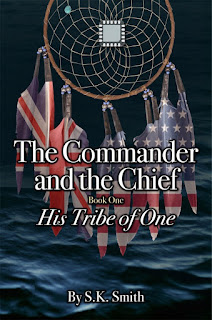 “With much pomp and ceremony.” Jack wiped the brew from his blond mustache. “But the Admiral’s death. Why would an admiral be flying alone? Into hostile air space? Especially where he’d previously been shot down? You send a drone, or one of your lackeys, someone more expendable. Not the Hero of the Dust Devil War.”

Wise glanced about, then lowered his voice. “Precisely. The press reported it as an unfortunate accident. They likened it to the death of Audie Murphy, the most decorated American soldier of World War Two. Murphy, too, was tragically killed in a plane crash, years later after the war.”

“And that should be the end of the story.” Jack finished his brew.
“But it’s not.” Wise continued, “The US Navy SEALs were alleged to have retrieved the Admiral’s remains in the desert—in the Forbidden Area. The Admiral’s body was apparently badly mangled. That’s why he had a closed casket funeral. He ostensibly has been laid to rest at Arlington National Cemetery in a very public display on American television.”

Jack squinted at Wise. “Sounds like you have doubts.”


“My client…she has many unanswered questions.” Wise rubbed his chin. “Dr. Orlovic has exhausted her resources at home. All her inquiries have been met with stonewalling and threats as she digs for answers. She believes the Todd Administration is covering up something terrible.”

So who was Audie Murphy?

The clip below gives a summary of his heroics and his life after the war:


Back to the book:

Lord Wise seals the deal with Colonel Sheffield with a reference to one of Audie Murphy's movies, To Hell and Back.


“Dr. Orlovic is waiting at the Gladstone Hotel as we speak. Indeed. She has serious doubts. And she’s wholly committed to do all she can to find her husband. Or at least find out what really happened to him.” Wise finished his brew. “The logistics are in place. I’ve hired other agents. They know only what they need to know. But you’re a critical piece, Colonel. An experienced soldier I can trust to lead this mission to hell and back.”
“Why should I meddle in this American affair? What’s in it for me?”

“First of all, we gambled that you’d take this job.” Then Wise showed a page on his mobile display. “But I’m counting on my client’s offer being one you cannot refuse.”

Jack’s blue eyes opened as wide as the Atlantic Ocean when he saw the seven-figure offer. “I’m in!” And they shook on it.

To Hell and Back:

And below is clip from the biographical movie, To Hell and Back (1955),  showing the heroism of Audie Murphy, starring Audie Murphy as himself:

This snippet from 1955 on What's My Line, before the movie To Hell and Back was released, tells what a big movie star he was in his day:  Audie Murphy What's My Line on 3 July, 1955

But his life was not a bed of roses after the war ...

Audie Murphy suffered from what we call post-traumatic stress disorder (PTSD), with symptoms of insomnia, nightmares, depression.  He battled addictions and suffered a tumultuous first marriage, which ended in divorce. But later he championed the returning Vietnam veterans and lobbied the government to extend health care to treat their PSTD and mental health problems. [reference: Audie Murphy and PTSD]

Gambling, womanizing, bad investments, bad publicity took their toll on this hero. In the late 1960s, Audie Murphy was bankrupt and his reckless actions had tarnished his public image.  [reference: Audie Murphy Facts]

Like General Patton who survived World War II, but died in a car accident, Lt. Murphy survived the war, yet died in a plane crash on a business trip.

So was it announced that day on May 28, 1971 on the various evening news programs:
Audie Murphy Announcement of Death (NBC, ABC, and CBS)

He was buried at Arlington National Cemetery.  And his grave is the most visited site, only second to President John F. Kennedy.  [reference: Audie Murphy Places]

And what better tribute than to soldiers like Audie Murphy would fought and suffered, even many years after the war.

Here are some pages:

* From the military:  Welcome to Audie Murphy Tribute Page

One final thought of bravery:

"Loyalty to your comrades, when you come right down to it, has more to do with bravery in battle than even patriotism does.  You may want to be brave, but your spirit can desert you when things really get rough.  Only you find you can't let your comrades down and in the pinch they can't let you down either."

And in the spirit of honoring those in World War Two, we are grateful for all veterans who have served and for those who still serve to keep us safe, home and abroad.