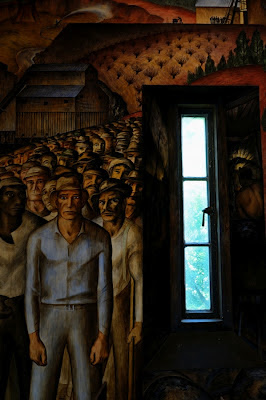 As a baby boomer, I grew up with parents who had lived through the Great Depression.

The mantra of their generation:

Use it up
Wear it out
Make do
Or do without

"We did not have this in the Great Depression."

"We did not have that in the Great Depression."

And it didn't take long for me to get sick and tired of hearing about the Great Depression!


I'm sure my folks were frustrated, too, by us young people - at least we were young back then - who didn't seem to have a clue as to what they had gone through when they were our age. But art and history had left us with many clues. Let's take a gander at the ....

Art of that era


Much artwork masterfully reflected the desperation of the Great Depression. One famous example - Dorothea Lange captured a snapshot of the harsh reality of the times in her iconic photography: Dorothea Lange | Shorpy Historical Photo Archive

Another, John Steinbeck's novel - The Grapes of Wrath - was made into an Oscar winning motion picture in 1940, telling the story of migrants, driven from their farms during the Dust Bowl to seek out work in the promised land of California.

But many ordinary people just wanted relief ... even if that relief came in the form of a fantasy to provide an ...

Escape from the grim reality of the Great Depression

And the movies provided such an escape - at least for an hour or two. Many motion pictures portrayed the blue bloods, high society, easy living in "screwball" comedies.
(reference: Movies in the Great Depression)

Warner Brothers put out one such movie in the 1930s with a seemingly escapist plot:

The Gold Diggers of 1933 did not disappoint their audience's hunger for escape with its characters of millionaires, high society, show girls, in another screwball comedy.

The title characters - the Gold Diggers - were the scheming show girls (Fay, Polly, Carol, Trixie) - who mixed it up with the blue bloods. Polly's heart throb, aspiring song writer Brad Roberts, hid that he was an heir to a large fortune. When Brad's cover was blown, his big brother Lawrence tried to stop Brad's marriage plans to a Gold Digger with not much help from the family lawyer, who happened to love show girls.

The first scene of the movie, shown below, opened with a fluffy number sung by Fay, played by Ginger Rogers - who also was in other films as the famous dancing partner of Fred Astaire.

We're in the Money conveyed a common theme during troubling economic times when many dream of wealth beyond their reach.

The opening number was cut short as the Broadway show was in trouble from the get go due to lack of funds. Alas, it closed before it had a chance to open, and the producer, Barney Hopkins, and the show girls were back looking for work. But Barney would not give up and had a wonderful idea for his next show, but needed ... money. Help came from Polly's sweetheart, Brad, the aspiring song writer - and a secret millionaire.

Most of the movie was fun with some more fluffy and even risque numbers - such as, Pettin in the Park. (This movie was" pre-code," made before the Hays code came fully into effect.) And those scheming Gold Diggers created mischief and chaos by swapping identities and toying with the blue bloods. But in the end Polly, Carol, and Trixie caught millionaires for husbands. Not so sure what happened to Fay.

The final scene of the movie surprised me.

In the first part of the movie, after Barney's show had closed before it opened, the producer was not to be kept down. Barney wanted to put on another show - a great show - that captured the spirit of the Great Depression. And song writer Brad happened to be working on such a piece - inspired by what he had witnessed out on the streets of New York - the forgotten man.

(The inspiration for Barney's next show is shown in first seconds of the clip below. Then the remainder of the clip shows the result, the final scene of the movie.)

Carol, played by Joan Blondell, sang the final number in Barney's Broadway show as well as the final scene in the Gold Diggers of 1933 movie. (If the name of the actress sounds familiar to you baby boomers, Joan Blondell also played saloon/hotel keeper Lottie Hatfield in a popular TV series of (1968- 70) - Here Come the Brides.) The lyrics and a commentary can be found here: Remember My Forgotten Man (1933)

This clip below is worth a serious look.

This was the final scene of the movie. Period. No more on how well the show was received by the public. No more about the producer, the Gold Diggers, or their beaus. Yet, on this somewhat downer note, Warner Brothers captured the ...

Zeitgeist - the spirit of the times ...

and the forgotten man endemic of the Hoovervilles that went up at the time.

And - for me - the final number captured some of the spirit of the times we are now living in. The country has been suffering through a deep recession and many - men, women, and children - undoubtedly feel like ...

Some of the scenes in the final number got to me as I thought of the war veterans from Vietnam, Iraq, Afghanistan, and other places home and abroad, which we owe a debt of gratitude. Tragically, many veterans have fallen on hard times, too, and are homeless.

Such scenes of the World War One veterans are shown in the clip above at these time stamps:

* Time stamp: 4:15 - The vagrant slumped near the doorway, harassed by the police officer, turns out to be a veteran with medal.

* Time stamp: 4:35 - The tempo increases showing the call to arms during World War One, followed by the troops coming back beat and wounded only to face unemployment and the bread lines of the Great Depression.

And my grandfather was one of those veterans of World War One, who really had to hustle to support his family and keep a job that had shrunk to only two or three days a week.

This final scene of the Gold Diggers of 1933 gave me a taste of the Great Depression and what the Greatest Generation had gone through.


And Remember My Forgotten Man?
from the Gold Diggers of 1933
- conveying the zeitgeist of the Great Depression as well as other trying times in our history and the challenges yet to come -
are part of the American culture
which, Lord willing, will be continued to be reinforced in this blog ....