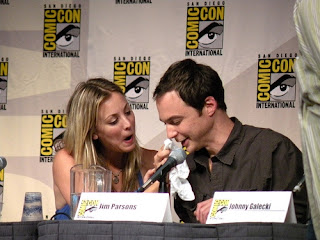 So knocks the compulsive Dr. Sheldon Cooper on the door of the cute aspiring actress from Nebraska across the hall.

This is a familiar recurring scene in the TV show, The Big Bang Theory.

What makes this comedy work is the tension between Sheldon (with his scientific geek friends) and Penny.  They conflict with each other's world views of different visions of reality. Sheldon looks for the underlying scientific reality - in everything.  Penny sees the immediate artist appearance - she is in the moment.

The opposite personalities of Penny and Sheldon resemble that of Robert Pirsig - author of  Zen and the Art of Motorcycle Maintenance (ZAMM) - and John and Sylvia Sutherland, the author's traveling companions for part of his road trip described in his book.  This time, Sheldon and Penny are a 21st century update (with more humor) of the clash of worldviews between Pirsig and the Sutherlands of the late 1960s.

Like Penny, the Sutherlands do no like technology - they loathe it.  Meanwhile the author really gets into it, like Sheldon, especially when he has become obsessed with the meaning and concept of values to literally the point of insanity.  Pirsig's thoughts on "Motorcycle Maintenance" are a touchstone into the transcendental - the higher meaning.

But to keep this simple ...

To set up the following clip from the 3rd season, Sheldon's roommate and fellow physicist, Leonard, is dating Penny.  To understand Leonard better, Penny asks Sheldon for help in understanding physics.


For a longer scene containing this clips - (I was not allowed to embed this one) - check out:  The Big Bang Theory - Sheldon teaches Penny Physics

This scene humorously portrays this conflict of visions of reality, which Pirsig describes when he was with the Sutherlands.  Later in ZAMM, the author postulates dividing reality in two - Classic (intellectual) and Romantic (pre-intellectual).

The two characters of the sitcom personify this philosophical split of world view.  So let's look at  ...

To paraphrase Shakespeare - There's a method in madness and also a madness in method.

Disorganized as seen her cluttered apartment, seemingly scatter-brained at times, Penny's madness has a method.

Penny does not have the formal schooling nor the encyclopedia knowledge as Sheldon, but on many occasions she demonstrates that she indeed smart.  She is the present moment, aware of her environs and what's going on in pop culture.  She is fully functional in society as she supports herself as a waitress, which demands satisfaction from her customers.  She has "street smarts" and knows how to survive.

Aspiring to be an actress, Penny pursues a goal in which she can practice her craft as daunting as founding a start-up company.  Both take gumption, perseverance, and applying a diverse skill set to break into a difficult field.  Facing much rejection and disappointment, she does not give up, but keeps on going.

In contrast to Penny, Sheldon's method borders on madness.

Sheldon is a human output version of Google, uses techno-jargon as his native language, and dissects and categorizes reality ad infinitum.  He is driven and very focused in his pursuits as a theoretical physicist.   Like Pirsig, Dr. Sheldon Cooper has a very high IQ.  His quest for unlocking the deep secrets of physics are as elusive as Pirsig's quest of understanding Quality.

Yet, Sheldon seems dysfunctional in society.   He is OCD to distraction.  His learned helplessness gives rise to his manipulation of his friends to do everyday things for him.  He doesn't or can't drive and depends on his friends - like Penny for rides.   Likewise having a very high opinion of himself, he brags of his mental superiority  - a trait  that shows that he really is dumb as dirt in the social skills department.  He would not survive without a little help from his friends.

Who's the "smartest" of them all?

I go with Penny.

(And I am a recovering physics major  - I understand Sheldon very well.   But I also love the arts and play the flute - I have a lot of "Penny" in me.)

Now, for the greater picture .... the transcendental of Sheldon vs Penny ...

The Chautauqua in ZAMM points that modern western culture has disconnected the arts from the sciences.  In other cultures, other times, the arts and sciences have always been connected with each other - bound up with the spiritual.   Yet, the arts and science are not opposed or mutually exclusive, but complement one other - part of a whole experience of reality.

If you have 45 minutes, below is a very good presentation of this - the connections between art and physics.


In conclusion, the arts and science are very much in sync with each other.

It comes down to integrating -

Zen - the spiritual part, the caring

Art - creativity as expressed in the arts, thinking outside the box, being in the moment

Motorcycle Maintenance - science and technology, the practical, searching for the deeper underlying meaning


Likewise, the Pennys and Sheldons of this world are all part of the whole and need each other to fully function.

Question:  Are you a Penny?  A Sheldon?  A little bit of both?


Previous articles in the ZAMM series: