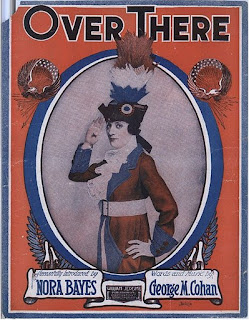 George Michael Cohan is an American icon as he wrote many patriotic songs, such as Give My Regards to Broadway, Yankee Doodle Dandy, Over There, You're a Grand Old Flag, which are played in this video clip below:

And James Cagney played this song-and-dance man in the musical Yankee Doodle Dandy (1942), which was made during a time when the United States had recently entered into World War Two.

The importance of music, especially in arousing passions and lifting spirits, is keenly felt during troubled times such as war ... especially a world war.

As newspaper headlines that day broadcast that the United States had declared war on Germany, one man, George M. Cohan started humming a tune, which he would compose a song and set to lyrics -Over There. (reference: Story behind the Lyrics)  And during World War One, Over There inspired young men to go and fight overseas as well as consoled those on the home front who were concerned for their loved ones - over there.

This story behind the lyrics is shown in this scene from Yankee Doodle Dandy: Over There
(It's worth a look, but I was not able to embed it, since its source on YouTube has disabled that feature.)

So we went over there in 1917. And we came back when it was over, over there. That is till the winds of wars inflamed the world again, and the United Stated was about to enter World War Two.

In this clip of the final scenes from Yankee Doodle Dandy, Franklin Delano Roosevelt presents George M. Cohan the Congressional Medal of Honor for his work on patriotic songs, such as Over There - which had inspired the nation, as shown in this clip:   Yankee Doodle Dandy Finale
(Again, I was not allowed to embed this one.)

And this scene of the James Cagney's tap dancing down the stairs was completely ad libbed. (reference: IMDb trivia)

George M. Cohan's legend and patriot songs are part of America's Story, which is


Previous posts in this series:

Previous posts on the World Wars:


Photo from Wikipedia Commons: Over There﻿
Posted by smithsk at 7:02 PM