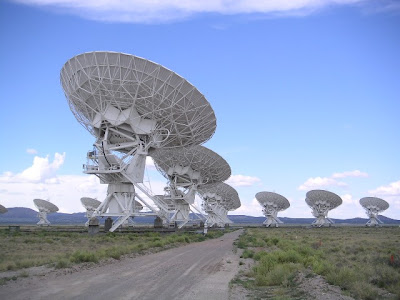 Since I was kid, I have loved science and was fascinated by good science fiction stories.

In early grade school, my first love was  Fireball XL5 during the age of the Space Race. Venus, the woman doctor and romantic interest of pilot Steve Zodiac, was my role model.

Then, as I approached junior high, along came Star Trek.  In the original series, the men were men (if they were not space aliens) and women wore very, very short skorts.  (Hey, this was the 1960s.)  And Mr. Spock was far-out, in many ways.

My college years, though, left little time for TV and little money for movies.  But during this time, the first of the Star Wars movies made its debut in 1977. And there were the endless reruns of the original Star Trek, followed by the first of many Star Trek movies.  And don't get me started on Star Trek - the Next Generation and its many other incarnations and movie sequels ....

Then came the 1990s, the other turn of the century.  The year 1997 was memorable in science fiction. Carl Sagan's book Contact was made into a movie. Though the movie deviated some from the book, the story on the big screen still told a good yarn and brought forth the long running discussion of science versus faith.

The opening scene of Contact was awesome.   We (especially hams) never know where our electromagnetic emissions will end up as they spread out across the universe. In the final seconds of the clip below, ham radio sparked the love of science and exploration in a little girl.

Those familiar with the movie know that this little girl would grow up to become Dr. Ellie Arroway, the protagonist of the story.  And she was a ham.  Another role model,

Now, we live in an age dominated by the Internet, cell phones, and numerous gadgets that tap into cyberspace.  Ham radio may seem so last millennium. But as we have seen in the news, systems get hacked, systems go down.  Meanwhile, amateur radio communications still work in spite of attacks or disasters.  Ham radio is not only a fun hobby, but a skill that can be so important to communicate with each other during emergencies when our higher tech systems fail.

Hams - the Next Generation

Like in the story of Ellie Arroway, hams need to continue to inspire children to love science and explore.  Not only that, ham skills need to be passed on to -  Hams - the Next Generation.

Who knows?  Hams may be sorely needed during troubled days and the next big national emergency.

Question:  Any movies or shows inspire you to pursue your hobby?