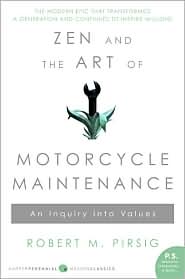 Robert Pirsig used this word to describe Zen and the Art of Motorcycle Maintenance.  After 121 rejections, an editor was willing to take a chance on it.  Pirsig's book was first published in 1974 and it quickly and unexpectedly became a best seller - and it still is.

This Swedish word kulturbarer translates as "culture bearer."  Zen and the Art of Motorcycle Maintenance is a culture-bearing book in the 20th century much in the way Uncle Tom's Cabin was a culture bearer for the 19th century.

In my blogger profile, I have listed Zen and the Art of Motorcycle Maintenance  - next the Bible - as one of my favorite books of all time.   This book has given me the tools to see the universe through a different filter of the mind.  Pirsig relates some difficult philosophies in the form of a story - which makes these concepts easier for the reader to digest and ruminate upon.

Written in the 1970s, the book came out when our culture was in flux. The Vietnam War came to an ignoble end; the counter culture of the 1960s was giving way to disillusionment; the first of many energy crises hit the country; Watergate lead to the only resignation of one of our presidents.  The ugly Gotham of the 20th century left many - perhaps as expressed by the counter culture - feeling disconnected.  Our values as a society and the certainty of our vision of the universe had been shaken.

Like orthodox Christians believe God is a Trinity - Father, Son, Holy Ghost -  so we humans are also trinity - body, mind, spirit.   And the title of this book captures the essence of a trinity as well.

Zen - the spiritual aspect, the caring about what we are doing
Art - the romantic, the artistic, the craftsmanship
Motorcycle Maintenance - the technology, the logical, the hard science

All three are connected in the totality of our being - who we are, what we are doing, and how we are going about life.

Below is a book review uploaded by AtlasRider on YouTube - given while riding - most appropriately - a motorcycle.

But this short review does not do the work justice.


In following posts about Zen and the Art of Motorcycle Maintenance (I'll call ZAMM for short), I plan to expand the discussion into the 21st century.

Question:  Have you read the book?  If so, any thoughts?

Photo from Barnes & Noble:   Zen and the Art of Motorcycle Maintenance
Posted by smithsk at 9:50 AM