Remember, Remember the 5th of November ... 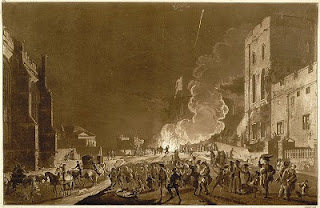 REMEMBER, REMEMBER THE FIFTH OF NOVEMBER

Remember, remember the fifth of November
Gunpowder, treason and plot
I see no reason why gunpowder treason
Should ever be forgot ....

Okay. What is this all about?

"Remember Remember" refers to Guy Fawkes from 17th century English history. On the night of November 4, 1605, Guy Fawkes was caught in the cellars of the Houses of Parliament with several dozen barrels of gunpowder. If this Gunpowder Plot had succeeded, King James I could have been assassinated as well as many in the House of Lords as Parliament would have been reduced to rubble during its opening session on November 5th.

By an Act of Parliament, November 5th - "Firework Night" - was designated by King James I as a day of thanksgiving for "the joyful day of deliverance."

For a summary of the Guy Fawkes Story, check out the video clip below:

For more of this legend and its legacy, check out: The Traditions Of Guy Fawkes Night

This "Guy" also made a big impression on the movies in the 21st century as he was the inspirational figure in the 2006 Sci-Fi film - V for Vendetta.

The movie plot revolved about a disfigured freedom fighter, who dons a Guy Fawkes mask, inflicting terror to fight against the totalitarian regime in futuristic England. And this second "Gunpowder Plot" to blow up Parliament succeeded as shown in this final act of defiance: V for Vendetta (finale).

As for the religious intolerance that had created a "Guy Fawkes," America has learned a few things from the mistakes of mother England - such as adopting the First Amendment to guarantee Freedom of Religion and a Constitution to discourage a totalitarian regime from taking over.

If there are any fireworks this 5th of November - or any other time, may they be in peaceful celebration!