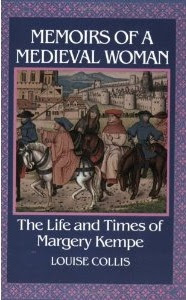 May you live in interesting times.

So were the times of Margery Kempe in the late Middle Ages.

Louise Collis wrote a fascinating and quite witty and entertaining biography about Margery's life in "Memoirs of a Medieval Woman, The Life and Times of Margery Kempe."

Who was this medieval woman?

Margery was a first. Her story is the first autobiography, that we know of, ever recorded in the English language. This fascinating woman lived in England from 1373 - 1438 when she was not on pilgrimages or about being a tourist.

Illiterate, Margery dictated her memoirs with remarkable clarity about 1438, near the end of her life. Her life's story - fraught with adventure and perils - became a hit with the medieval readership. Then the original manuscript of her autobiography disappeared sometime in the 16th century, but resurfaced - with much excitement - in 1934 in a country house in Yorkshire.

She came into this world in 1373 after Europe had been decimated by the first wave of the Black Death (1349) and grew up during the tumult of the Peasants Revolt of 1381. Most of the reigning monarchs in her days were subjects of Shakespeare's plays:

Margery lived in interesting times from the religious perspective as well.

As a devout Catholic, Margery pursued with much passion a lifelong career of sainthood during the Great Schism (1378 - 1417), and went on pilgrimage to Jerusalem and Rome when there were three popes at the same time in the Roman Catholic Church (Benedict XIII, Gregory XII, John XXIII). In her homeland of England, she was a contemporary of the legendary anchoress, Dame Julian of Norwich (1342 - 1417).

The Church, at a low ebb, was undergoing its troubles in Margery's day. Its authority was being challenged by reformers and dissidents, foreshadowing the coming of Martin Luther a hundred years later. Another of Margery's countrymen, the Morning Star of the Reformation, John Wycliffe (1330–84), initiated the first translation of the English Bible. During one of Margery's pilgrimages, John Huss, Czech priest and follower of John Wycliffe, was burned at the stake for heresy in 1415 during the Council of Constance (which was convened to resolve this Great Schism thing and the issue of three popes reigning at the same time.)

Yet, Margery failed to mention most of these watershed events. Her legacy is her story of a woman quite self-absorbed with herself, her visions, her prejudices, and her everyday life.

Below is a YouTube video from the Terry Jones' BBC series "Medieval Lives: The Damsel."   I could not find a shorter clip, but, if you just wish to focus on Margery's story, it is briefly told from 20:30 to 24:00.

Though Margery dictated her memoirs with a bias slant - she was always right, her detractors wrong - her flaws surely come through. This is what makes the book a good read. Louis Collis's biography resurrects this real woman - warts and all - and transports the reader back 600 years to an exciting time in history.

Next planned post, if Canterbury Tales were a reality show, Margery would be the star!

Book cover from amazon.com:  Memoirs of a Medieval Woman
Posted by smithsk at 2:30 PM

Email ThisBlogThis!Share to TwitterShare to FacebookShare to Pinterest
Labels: first English autobiography, Louise Collis, Memoirs of a Medieval Woman, The Life and Times of Margery Kempe