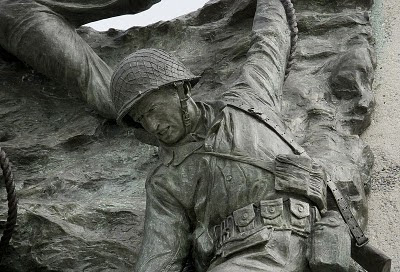 In June of 1944, the World War II Allies launched the Invasion of Normandy, then the largest amphibious invasion of all time, which commenced on a day we know as D-Day.

Many great movies have been made about D-Day or have included it in their larger story. Among them:

"Soldiers, sailors and airmen of the Allied Expeditionary Force. You are about to embark upon the great crusade, toward which we have striven these many months. The eyes of the world are upon you. The hope and prayers of liberty-loving people everywhere march with you."
(from Department of Defense, The Passing of the Torch)

So on the beaches of Normandy, France, more than 100,000 soldiers began the march across Europe to fight Nazi Germany. And this was over 60 years ago.

I think these words from Sir Winston Churchill say it best:

"Never in the field of human conflict was so much owed by so many to so few."


Photo from Wikimedia Commons: National D-Day Memorial
Posted by smithsk at 10:50 AM