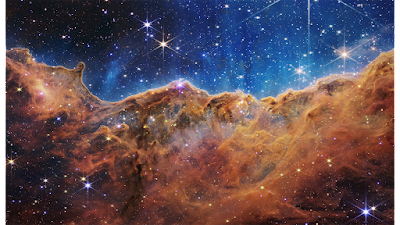 It was named after James E. Webb, NASA administrator from 1961 to1968 during the Mercury, Gemini, and Apollo programs.

The telescope was a long time in the making, first planned in 1996 and projected for launch in 2007. But cost overruns and delays and a major redesign in 2005 had pushed the completion date to 2016.

And it was actually launched on Christmas of 2021.

The JWST, a large infrared telescope, is being used to study the history of our Universe, such as:

* the first luminous glows after the Big Bang

* the first galaxies formed in the early universe

* the data to support theories of the evolution of our own Solar System.

As the largest optical telescope in space, its greatly improved infrared resolution and sensitivity allow it to view objects too early, distant, or faint for the Hubble Space Telescope.

Below is live stream of continually updated images:

Before telescopes, none-the-less space telescopes, people have gazed at the night sky with the naked eye and were awestruck.

Here are portions of two Psalms that express this:

Lord, our Lord,
how majestic is your name in all the earth!
You have set your glory
in the heavens.
2 Through the praise of children and infants
you have established a stronghold against your enemies,
to silence the foe and the avenger.
3 When I consider your heavens,
the work of your fingers,
the moon and the stars,
which you have set in place,
4 what is mankind that you are mindful of them,
human beings that you care for them?
Psalm 8 (NIV)

The heavens declare the glory of God;
the skies proclaim the work of his hands.
2 Day after day they pour forth speech;
night after night they reveal knowledge.
3 They have no speech, they use no words;
no sound is heard from them.
4  Yet their voice goes out into all the earth,
their words to the ends of the world.
In the heavens God has pitched a tent for the sun.
5     It is like a bridegroom coming out of his chamber,
like a champion rejoicing to run his course.
6   It rises at one end of the heavens
and makes its circuit to the other;
nothing is deprived of its warmth.
Psalm 19 (NIV)

Astronomer, scientist, nature lover, gazers of the night sky....
As the astronomer, late Jack Horkheimer , would say, signing off each episode of Star Gazer---
Keep Looking Up!