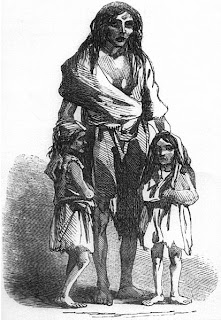 It is a terrible scourge on any living thing.

And the scarcity of food has many causes.


Famine has been felt on all continents at different times throughout our history. In its wake are the ravages of malnutrition, starvation, illness, and death.

Yet, the Old Testament prophet Amos spoke of a most unusual famine.


Behold, the days come, saith the Lord GOD, that I will send a famine in the land, not a famine of bread, nor a thirst for water, but of hearing the words of the LORD:

And they shall wander from sea to sea, and from the north even to the east, they shall run to and fro to seek the word of the LORD, and shall not find it.

What's the story on this?

The God of Abraham, Isaac, and Jacob had given Israel His Holy Word. But during 8th century BC, the children of Israel had rejected their Covenant. As evidence of their apostasy, the Israelites in the Northern Kingdom had resurrected the worship of the golden calf (Amos 3:13, 14 and note that Bethel was the site of the golden calf. ) and rejected the words of Amos – God’s prophet.

In the verses above, God speaking through Amos, His prophet, was telling the Northern Kingdom they would no longer have the privilege of hearing His Word.

One of God’s judgments is silence.

These verses from Amos 8:11,12 were chosen as the theme of the first book of the trilogy:

The setting of this historical fiction is in the tiny kingdom of Opulentia, anno Domini 1375.  Opulentia seems to be at her zenith, but is in great danger of being overthrown by greedy men and from collapsing from within.

The people outwardly had turned to God during the Great Plague of anno Domini 1349 - known today as the Black Death. But instead of giving praise to God, credit was given to a dead saint, which turned out to be almost as profitable as the kingdom's famous mines.

The Shrine of St. Barbara, which commemorated the Great Miracle of the Passover of the Great Plague, draws many pilgrims and further enriches the Church with their offerings. Likewise, the magnificent Cathedral of Our Lady of the Mines receives visitors throughout Christendom.

The established Church at this time is wealthy, but spiritually wretched, and miserable, and poor, and blind, and naked.  Corruption has infiltrated the Church of the Middle Ages like a cancer.  The business of saving souls has evolved to the big business of selling souls.


Below is a clip of what the spiritual condition may have been like, such as this scene set before the Protestant Reformation:

Like Amos had prophesied to the Northern Kingdom, Opulentia suffers from a famine of the Word of God.  The Bible has been withheld from the common people and forbidden to read for hundreds of years. Sadly, the Gospel has become lost in the Church.

Yet, there still was a small voice – like Amos – which could ignite a revival and truly bring the people Back to Bethel ... which is the subject of the next post in this series.


Even the Dark Ages could not extinquish the Light.

For more information on the eBook

Previous posts on the Anastasis series:

Previous posts of this subject: