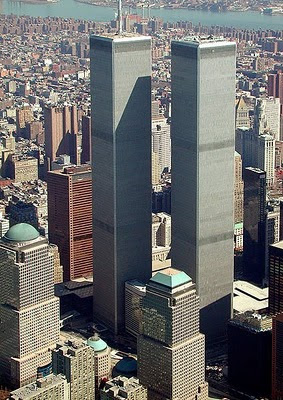 Nine years ago .... We were in the ninth month of a new century, a new millennium.

Then on September 11 , America was attacked, the Twin Towers of the World Trade Center came tumbling down, and thousands of innocent lives were lost.

The War on Terror continues on to this day, and there still are so many questions ....

Many books have tried to get their arms around this big question of Why?
Check out:
* Rabbi Harold Kushner's When Bad Things Happen to Good People.
* Victor Frankl's Holocaust experience: Man's Search for Meaning
* William Young's The Shack .
* The world's best seller of all time - the Holy Bible ....

In 1973, Godspell - a musical based on the Gospel of St. Matthew - came to the big screen. One of its catchy numbers - All for the Best - tackles some of the why questions as the lyrics can be summed up by St. Paul's assertion:

And we know that all things work together for good to them that love God, to them who are the called according to his purpose.
Romans 8:28 (King James Version)
Below is a video clip of that number.
(It's almsot5 minutes long, but if you see anything, check out the final scene at 4:20 to 4:40.)

The final seconds of the last scene, they are literally ...

The Twin Towers were yet to be finished when Godspell was filmed, and 28 years later the World Trade Center came tumbling down.

I don't know why 9-11 - or countless other acts of evil - happen. Only God knows, and He has a plan. It seems He allows evil to run its course while moving forward with His purpose to the day when He will make all things right:

And God shall wipe away all tears from their eyes; and there shall be no more death, neither sorrow, nor crying, neither shall there be any more pain: for the former things are passed away.
Revelation 21:4 (King James Version)

May the God of all Comfort be with all of you who suffered have loss, whether during the 9-11 attacks or the War on Terror. And God bless and protect our troops, who fight vigilantly to protect us and keep us safe.

Email ThisBlogThis!Share to TwitterShare to FacebookShare to Pinterest
Labels: 1973, 911, bless troops, Godspell, It's all for the best, September 11 2001, World Trade Center