Of Seasons, Boat People, and Freedom ... 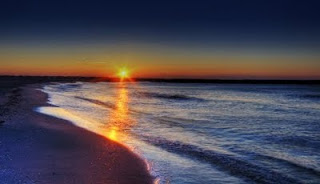 Fall begins with the autumnal equinox, this year September 22, 2009 at 5:18 pm EDT. Change of seasons evoke many memories. One that stands out happened when I was living and working on the West Coast.

I had made some casual conservation with my cubicle mate, John, about the changing seasons. John was a bright engineer, an immigrant from Vietnam. I was most surprised by his comment that he thought it was cold in the winter because the earth was farther from the sun.

How could someone so educated be ignorant about a basic fact? I had learned about the seasons in kindergarten. At my teacher's instructions, my mother had speared an orange with a pencil and rotated the citrus fruit at an angle in the light of a candle.

I pointed John to some websites, such as Seasons. They explained the earth rotated about a tilted axis, whereas in winter the sun's ray were less intense, the days shorter, hence contributing to a colder climate. In summer, the rays were more direct, more intense, the days longer, hence a warmer climate.

As I got to know John better, small bits of his personal history came to light. When growing up in Vietnam, he had lived under the communist regime of the post-Vietnam War. His family had to work all day in the rice fields just for the privilege of buying rice at a discount from the government. I wondered when his family had the time to make any money to buy this discounted rice.

John was one of the boat people. I found this out when he cheered at a news story about pirates that were gunned down on the seas. He commented that his boat was attacked by pirates while he was fleeing Vietnam. Later, he had spent two years on an island. Eventually, he came to America, got a college degree in engineering, married, and had a son, and was working right next to me.

Shelly, another engineer from Vietnam, worked a few cubicles over. One day she laughed, pointing to some discolored water in a clear container. "It reminds me of the urine we drank when we ran out of fresh water." Shelly was one of the boat people, like John.

While I was growing up watching "Star Trek" and learning facts about the universe and the solar system, John and Shelly had grown up under tyranny and survived a gutsy escape to freedom.

The Vietnam War was the bane of the baby-boomers. Yet, for as evil as America was supposed to be, many Vietnamese risked their lives to come here. Many came for political freedom, many for economic freedom. Yet, may we all find the greatest freedom of all:

If the Son therefore shall make you free, ye shall be free indeed.
John 8:36 (King James Version)